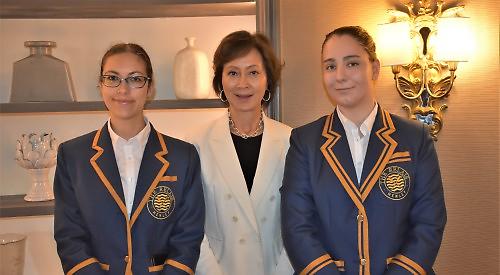 THE former Red Lion Hotel in Henley has welcomed its first guests after undergoing a multi-million pound refurbishment.

Now known as The Relais, which is French for “coaching inn”, the historic premises in Hart Street has been extensively modernised and will soon have a new restaurant as well as four extra bedrooms, bringing the total to 40.

It closed under previous owner Sam Gill, of MG Hotels, in March last year and was bought by international hotelier Grace Leo and her business partner, shipping company chief Tim Hartnoll, in October.

Their contractors began stripping out the old fixtures and fittings the following month before embarking on the overhaul, which included opening up several public areas to create more space, upgrading every bedroom and adding a lift.

The work has taken longer than expected because some parts of the Grade II listed building were in a worse condition than Ms Leo realised when she bought it.

Additionally, the first building contractor pulled out of the project due to other commitments so another had to be found at short notice.

The Relais was still able to open with a “soft launch” on Thursday last week, as the owners originally intended, but a small number of bedrooms are yet to be redecorated while only one of the hotel’s two bars is trading.

The new Clipper restaurant, which will be run in partnership with Mosimann’s restaurant in Belgravia, is also unfinished but should be up and running within a few weeks.

Ms Leo, who has spent her career in the luxury hotel industry, says she is excited about the future in spite of the problems and feedback from her first dozen or so customers has been positive.

She said: “We’ve had a lot of residents walking in to see what it looks like and our guests didn’t mind not having food service because it’s such a unique experience to be among the first to stay here.

“There’s a lot of curiosity among the people of Henley and perhaps a little trepidation because they feel like it’s ‘their’ hotel and want the assurance that it’s being treated respectfully.

“Before we came on board, there had been talk of converting it into a care home or some kind of housing and I think that has made people nervous about any new owner’s intentions.

“However, I hope people will agree we’ve done a good job because we recognise how important this building is to the town.

“It is hundreds of years old and, as with previous owners, we feel like we’re its custodians and have a duty of care.”

Ms Leo says the Red Lion, which had been on the market for several years, was “tired” and in poor condition when she first visited last summer but she saw its potential and is pleased to have brought it back to life.

She was attracted by Henley’s reputation and connection with the River Thames and believes the Relais will prove popular during major events like Henley Royal Regatta and the Henley Festival.

She said: “I’m always on the lookout for new opportunities and was keen to take on a hotel of roughly this size near London and the M25. I didn’t know Henley intimately before I visited but I loved the location as you can’t hope to get closer to the river while the views over the Thames, with rowers training on the water, were idyllic.

“I specialise in giving a new lease of life to neglected hotels in town centres and as soon as I saw it with my own eyes, I had a very clear idea of how I could turn it around.

“Most people would have been discouraged to see the condition the Red Lion was in but you’ve got to be willing to take that risk. Even I didn’t know exactly what I was getting into at the outset.”

The old dining room overlooking Thames Side is now being refurbished as Palm Court, a large room which will be available to hire as a working space during the week and will serve as a general seating area at other times.

A tea salon overlooking Hart Street, which keeps its listed timber framing, has been repurposed as the Quarter Deck bar and this will have an outdoor seating area in the shadow of St Mary’s Church. Earlier this year, a landscaping specialist trimmed back wisteria along this frontage and secured it to the brickwork to prevent it from collapsing.

The red lion statue above the hotel entrance arch has been cleaned and new signage, which will include the old name in a smaller font as a nod to its heritage, will be added once South Oxfordshire District Council has granted planning permission. The rest of the makeover has already been approved.

Every bedroom has been redecorated in one of three colour schemes, including one themed around the regatta, while the en-suite bathrooms have been tiled with marble and air conditioning installed.

The royal crest on the brickwork of the first-floor corner room, which signifies that King Charles I stayed there at some point, has been encased in a protective cabinet which can be unlocked for viewing.

Still to open are the Clipper, which will have 60 covers plus 20 additional seats under a pergola in the resurfaced courtyard and will serve “sophisticated comfort food”.

There will be a second bar called the Clip, a delicatessen serving snacks in the ground floor corner area and four new bedrooms in the archway space above the side entrance.

These should all be ready by the start of the regatta on August 11 except for Palm Court, which will open in September.

Ms Leo said: “We’ve added everything that people have come to expect in the 21st century without detracting from the architecture or character. It’s not a ‘country house’ hotel but we’ve kept the charm of an historic building while adding some modern touches.”

In keeping with the rowing theme, the staff wear blue blazers with an ochre trim made by Collier & Robinson, of Greys Road, Henley, which provides blazers to rowing clubs around the world.

These incorporate the hotel’s logo, consisting of two crossed blades over a background of flowing water, on the breast pocket.

Ms Leo said: “That came about through a chance conversation with Kristie Shemilt, who owns the business as well as a property near our hotel. When I found out what she did, I immediately saw a chance to work together.

“We finally received the blazers a week ago and I’m so proud to see the team walking around wearing them. It gives the place a strong sense of identity and ties in perfectly with the town’s history.”

She and Mr Hartnoll began renovations as soon as the premises were handed over and they found numerous cosmetic faults, such as cracks in floors, wall and ceilings, and rotting timbers.

These are still being filled, replaced or reinforced on a rolling basis as the last few rooms and public areas are made ready.

Nicholas de Klerk, the project’s architect, said: “It needed specialist care on a room-by-room basis to comply with the heritage requirements.

“When Grace viewed the building, it was fully fitted out so there were issues that nobody could realistically have known about.

“There were no serious structural issues but the building had moved over time and some beams needed bracing, for example, to make sure they didn’t move any further.”

Ms Leo added: “We found a lot of Seventies and Eighties additions that were never given permission. Back then, I think people just built what they wanted.

“We wanted to open up the entrance area so we removed a lot of small offices and ‘cubby holes’ to create a direct access to the restaurant and courtyard, which was more in keeping with its Victorian
origins.”

The builder had to limit the number of workers on site to comply with covid-19 regulations during the third lockdown.

Ms Leo and the project team met online to discuss progress, which caused further delays, while costs increased as materials had to be ordered from British suppliers instead of European ones because of possible hold-ups after Brexit.

The scheme was supposed to cost about £3 million in total but Ms Leo estimates the final figure will be nearer £4 million.

She said: “The whole thing is probably behind by about three weeks, which isn’t at all bad considering everything we’ve been through. We’ve had to step up our efforts in the last month or so but we’re confident that everything is on track.”

She has filled about 26 of 45 staff vacancies, including manager Jonathan Payne and other senior positions, but says Brexit has also made it harder to recruit kitchen and waiting staff as there are few British candidates.

Ms Leo said: “We’re very much feeling the pinch and still struggling in that area.

“European nationals have always been keen to work in this sector and are typically more qualified and well-trained, wherever on the continent they’re from.

“Historically, hospitality has never been as respected here as in other countries, even though the industry is a main contributor to the economy. We’re almost treated as second-class citizens and not respected as professionals.

“Because of that, recruitment has been like drawing blood from a stone but it’s all coming together and interest is bound to pick up as more people become aware that we’ve re-opened.

“Our next goal is to be up and running before the start of the regatta, which is very important to show the community that it’s back to business as usual. I think people need that after covid.

“We’ve only just opened to bookings so we’re not full yet but there’s a lot of interest around the Henley Festival [in September] and we’re looking to work with companies like Hobbs of Henley to offer boat excursions.

“I see the Relais becoming integral to Henley’s social calendar because there isn’t much of a hospitality offering at the moment.

“This building is part of the town’s historic fabric but it has been neglected and forgotten in recent years so revitalising it will bring a lot of trade to other businesses. Everybody will benefit from it.”