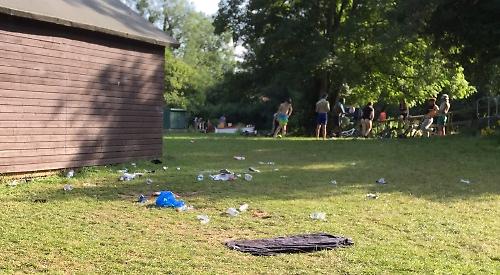 VISITORS to Hurley Lock are being urged not to leave litter along the riverbank.

During the recent heatwave, dozens of people went to the village and many of them were jumping into the water from the bridge.

On Thursday last week, a large amount of rubbish was left behind, including plastic bottles and food wrappers.

Last year, the Hurley Village Association paid to have two large green bins installed at the car park off High. There are also 10 blue bins at the lock island, which are primarily used by boaters but also accessible to the public.

Volunteers collect rubbish from around the lock area reguarly, despite the number of bins available.

Councillor David Burfitt, who lives in Mill Lane, Hurley, said: “When the sun shines, Hurley gets busy. To a certain extent, you come to expect it. We get about a dozen Sundays in the year when an awful lot of people come to the village and create a little bit of chaos. We sit in our houses and try not to go out on those days.

“Most people are very good and take their rubbish with them. Even if we put more bins in, I think people that are inclined to leave rubbish will still leave rubbish.

“The police were called out the Sunday before because there were people jumping off the bridge and that is just what teenagers do. The Environment Agency does have bins down by the toilets but the nature of the beast is that some people will still leave rubbish behind. The villagers go down regularly — almost every day — and pick up any litter. It is sad in a way.

“We don’t want to blame youngsters or family groups. It may be one of those groups but unless you stand there all day long it is hard to know for sure.

“The association has had, at its own expense, two big bins put in the car park because the council bins are not big enough to cope.”