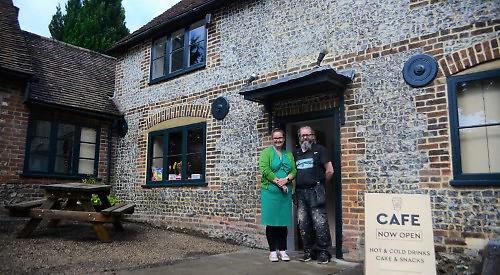 A DISUSED pub has been transformed into an “art space” with a café, workrooms and classes.

The Crown in Nuffield closed in 2013 but was bought in 2019 by Kay Surman and Jon Boughty who have renamed it the Maker Space with the emphasis on crafts and making skills.

The couple opened the café earlier this month and hosted local artists and more than 150 visitors as part of the recent Henley Arts Trail.

They are planning to hold more events and discussions and are offering private hire for groups and clubs to meet as well as weekly “drop-ins” where people can meet informally, bringing their current project for a few hours of craft, coffee and cake. Classes will include traditional figurative arts such as painting and sculpture as well as sewing, quilting, glassmaking, knitting, book-binding, garden crafts, leather-working, upholstery and lamp-working.

Ms Surman, 47, a textile artist, said: “I’ve always been crafty. I get satisfaction out of making things — it’s a form of therapy. I believe that anyone can be good at art and I want to encourage as many people as possible to try it.”

The former pub is Grade II listed and more than 300 years old. Ms Surman, former head of creative and product development for Disney, said: “Jon and I came and had a look at the pub and fell in love with it.

“It’s such a beautiful building and it’s such a shame it was left unused for so long.

“It needed some love. After lying empty for eight years, it was in a pretty sorry state.

“So, in the middle of a global pandemic, we decided to bring it back to life.

“We wanted a place with good food and good crafts.

“The local community have been so supportive of us and are pleased that it has become a meeting place once again and they seemed really pleased with what we have done with it. The building itself is listed so we needed to be really careful of what we were doing but we wanted a mix of old and new, keeping the original elements and adding modern touches.

“There’s so much we can do with it and I’m sure it will evolve as more and more people get involved.”

The main room on the ground floor was turned into the café with the old bar used as a worktop and the dark red and black paint was removed to reveal the building’s original woodwork.

Artworks produced at the Maker Space will be used to decorate the walls and the adjacent room is currently being set up as a lounge space where dogs will be welcome. The old toilets and boiler room were knocked down to create an open space which will host the classes and workshops.

The kitchen has been renovated and will serve breakfast, lunch and dinner on particular occasions.

The couple worked on the garden at the back of the pub while they waited for change of use permission to be approved.

Mr Boughty, 48, a former web developer, said: “The pub is a local landmark and people have told me they had driven past it for years and wanted it to open again.

“We worked on it for so long that I lost track of time but seeing people coming in really makes a difference and we are proud of what we have done. Unusual crafts are more difficult to access and we want to be able to provide a wider choice — it’s about everyone finding their craft.”

Ms Surman added: “When we opened we thought it would be really quiet but we had so many people coming in.

“After seeing us working on it for so long, they knew we were here and saw our progress step by step.

“We also had people who worked here when it was a pub and everyone seemed so pleased it was finally brought back to life.”