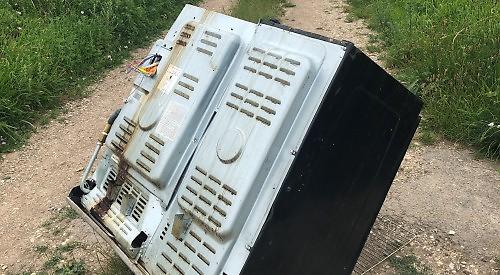 THE Ridgeway off Britwell Hill was blocked by a large pile of fly-tipped household waste on Saturday.

The rubbish, including a kitchen sink and worktop, a microwave oven and a double oven, was discovered by Claire and Miles Willett, from Benson, who were cycling along the historic path from Watlington.

Mrs Willett said: “We are keen cyclists and do a lot of off-road cycling.

“We also enjoy nature, so it was upsetting to see the rubbish dumped there.

“It was appalling — the track was blocked completely so not only was it polluting but also dangerous for anyone walking or cycling there.

“My husband and I were both shocked.

“We live in such a beautiful area, so it is really sad to see something like that.

“It makes me think that whoever did this does not live anywhere near here and just does not care.

“We have taken pictures so hopefully the former owner of the kitchen will recognise it.

“I think everyone should have proof of where their waste will be dumped when doing renovations.

“We need to become more aware of how our waste is disposed of.”

A spokeswoman at South Oxfordshire District Council, the waste authority, said: “We are investigating three fly-tips in the Britwell Hill area of Britwell Salome, which all appear to have happened over the weekend.

“It was reported to us that the fly-tips consisted of, firstly, a large pile of building waste, the second a green tarpaulin and the third a bottle chiller.

“When the envirocrime team attended some of the building waste and the bottle chiller had been removed.”

Anyone with information about the incidents of fly-tipping should call the envirocrime team on 01235 422146 or email envirocrime@southandvale.gov.uk