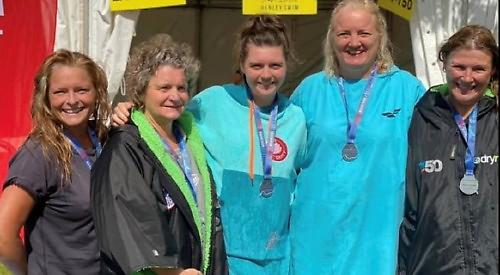 MORE than 700 people took part in the Thames Marathon on Sunday thanks to the introduction of a new shorter event.

Participation was down for the main swim, which was 10km rather than 14km due to it clashing with the rescheduled Henley Royal Regatta.

But the overall total of swimmers was boosted by those taking part in the new 5.5km event.

The 10km athletes set off in waves from Hambleden Lock at 7am and swam to Higginson Park in Marlow while those taking on the shorter distance started near Frogmill at 10.30am.

The fastest swimmer was George Taplin, from Iver, who finished in one hour and 38 minutes.

Mother and daughter Marika and Alexis Perkins, who are both members of Henley Open Water Swimming Club, both did the full swim without a wetsuit.

Mrs Perkins, 55, a science teacher from Peppard, completed it in two hours and 52 minutes. She said: “I did it before in 2018 when it was the full route, but this didn’t feel diminished to me.

“It was downstream but there wasn’t much flow. I didn’t have a time in mind, but I was very pleased with mine.

“The big thing for me was that last time I did it in a wet suit and this time we all did it in skins.”

Mrs Perkins said: “I was really proud of her. It is a wonderful thing to do together.”

Alexis, who is is studying for a master’s degree in cardiovascular and respiratory healthcare at Imperial College London, said: “I was first in my category but I think there were only three of us.

“It is a piece of water that we all know well which it meant we could try a bit harder.

“I’d never done it before but I remember watching my mum do it previosly and thinking that I should have a go.

“I only really started swimming properly just before the winter.

“It was unfortunate that it was slightly shorter but I hope to do it with mum again next year.

“There is something great about jumping in the water at 7am when it is freezing cold.”

Swimmers excited the water at Hurley Lock after 6km and at Temple Lock after 8km to refuel with  drinks and snacks.

The Thames Marathon is organised by Henley Swim but it did not go ahead last year due to the coronavirus pandemic. It was first completed unofficially by company founders Tom Keane and Jeremy Laming in 2004 and the first official swim took place in 2011.

Juliet Hume, director of operations for Henley Swim, said: “It went really well and the introduction of the half distance event was really successful.

“The number of full-distance swimmers was down because of covid and swimming pools not being open. People didn’t feel they had the time to do the training.

“We always knew there was a potential for it to clash with the regatta. We wanted to see if we could still be on the Henley stretch, but it became apparent that we couldn’t do that safely.

“It is still an amazing achievement to swim from Hambleden to Marlow. The majority of people were just happy to get a swim in this year because so many other events have been cancelled.”