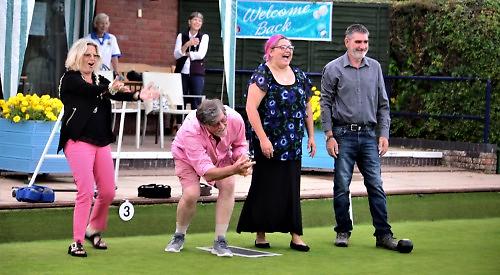 She took part in the annual bowls match between Henley Town Council and the town’s bowls club at its green in Mill Meadows on Thursday last week.

The match had been postponed from June due to bad weather and didn’t fare much better this time as it was abandoned after just an hour of play due to heavy rain.

However, not before the Mayor, council staff and other councillors, including Stefan Gawrysiak, Kellie Hinton, David Eggleton and Ken Arlett, and six members of the club had had a go.

They were keen to continue playing as long as they could even in the wet and some of them used beach umbrellas to shelter from the rain.

When the match was finally called off, it was declared a draw and the players enjoyed a supper of fish and chips under a gazebo.

The Mayor said: “It was the first time I had played bowls and it was really good fun — I think my experience of playing marbles as a child helped.

“I’m always up for a challenge and it would be lovely to play for a little longer next time. It was so nice to be invited by the bowls club. They are a lovely group of people so thank you to them for organising it.”

Kevin Browne, acting treasurer of the bowls club, said: “Despite it being August, the weather was again inclement with a light drizzle turning into stair-rods. However, the hour or so of bowling was still enjoyed by all even though many, including the Mayor, got soaked to the skin.

“With many of the councillors having been to these events over the years, we suspect a full game of bowls between the council’s best three against some of our new members would have been a close match. Everyone seemed to enjoy the event and following some socialising under the club’s gazebo everyone enjoyed a fish and chip supper, allowing everyone to dry out a little bit. Here’s hoping that next year the weather is kinder.”