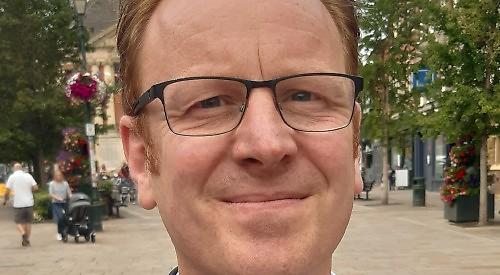 Simon Mack, 48, was having a coffee at the regular farmers’ market in the town centre when he thought that the area would benefit from a huge canopy which could be put up for the summer months.

He said: “My studio is just opposite the town hall and I love the centre of town.

“I think it would be great to have an open space that we could use in the summer with a semi-permanent cover that flows around the trees.

“Using something like that to host things during the summer could be really fun — a modern take on a more traditional market town’s covered area.

“I imagined it staying up for three months of the year. I know that as soon as it rains that part of town becomes completely empty and this would be a covered space to prevent that — it wouldn’t be affected by what the weather looks like. I think it would bring attention to the centre of town because a lot of things in Henley happen outside the centre.

“It could be used for displays, concerts and exhibitions and give more people a reason to come to Henley.”

Mr Mack, who lives in Walton Avenue with his wife Alexandra Stafferton and 14-year-old daughter Jessica, mentioned his idea and presented a sketch at a recent meeting of the Henley Business Partnership.

He said: “My happy place is where I’m sketching. I thought it was an exciting idea and everyone seemed on board with it.

“I hope people will see the potential in it and that the town council will consider it.

“It wouldn’t be just for retail and people selling things but also an area for schools to use.

“More people would be attracted to the market and it wouldn’t be so restricted and weather-dependent. It would be a space that is open to everyone and not just retailers.

“It would be fantastic to have an open space that is covid-safe as well. It would help Henley to become more resilient during these times. The idea was definitely inspired by covid.”

Mr Mack became an architect in 1990 and lived and worked in London for 20 years before moving to Henley 12 years ago. He specialises in residential architecture.

He said: “I support Henley and I use local as much as I can — most of my clients are in the Henley area too and I love working with local people.” At the moment, about 14 traders pitch up on Falaise Square on the second Saturday and fourth Thursday of every month.

Earlier this month, Niki Schäfer, who chairs the business partnership, called for an expansion of the farmers’ market, with more local food produced by local people.

She said the market could instead be held inside a larger enclosed area and traders could be encouraged to give demonstrations or talks about their production methods after packing up their stalls at about 2pm.

Isobel Harris, the partnership’s manager, said: “There were even suggestions of a large marquee on the square but it would take a huge amount of work to set up and take down every week, so I don’t know if that’s practical.

“Expansion is a good idea generally but we’ve only really had a few off-the-cuff conversations while throwing ideas around. I don’t think it will happen overnight, although the demand’s clearly there.”