I am a double Wimbledon champion at the age of 86 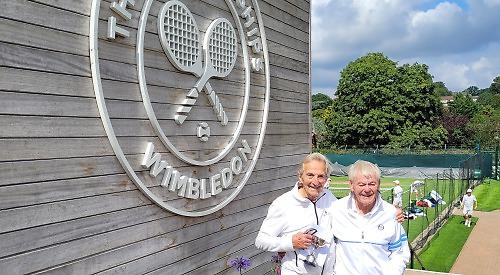 A MAN from Medmenham has won the Wimbledon singles and doubles titles — at the age of 86.

The All England Club hosted the event, which was organised by the International Tennis Federation.

In the singles competition, Leonard beat Gordon Oates 6-1, 6-1 in the final, having lost only one game in the semi-final against Tom Baron the previous day.

The doubles final was much closer as he and his partner Leonard Lawrence defeated Baron and Oates 7-6, 5-2.

Leonard, a retired company director, who is ranked number one in the country among the seniors, said he was “delighted” at his success, especially having lost in the semi-final of the singles competition two years ago.

He said: “This is my third or fourth national championships and I always get through the early rounds and usually lose at the semi-final stage.

“This time I won it fairly easily and I was really thrilled. I almost felt sorry for my opponents. They have both played for Great Britain for many years. Tom Baron and Gordan Oates are both very keen players.”

He said the players weren’t allowed to have friends or family to spectate due to the coronavirus restrictions but they were well looked after at the famous venue.

Leonard, who lives in Henley Road with his wife Suzanne, only started playing tennis when he was in his forties after being inspired by his hero Björn Borg, the Swedish player who won the Wimbledon singles title five times and a total of 11 Grand Slams during the Seventies and Eighties.

He started playing at Bisham Abbey National Sports Centre in Marlow and was chosen to represent Berkshire.

He then competed for Great Britain for the first time when he was in his seventies.

“I’ve become an absolute tennis freak,” said Leonard. “I practise every day for about an hour to an hour-and-a-half with people about 40 years younger than me.

“It’s a sport I’m passionate about and if I don’t play every day I get withdrawal symptoms.”

Leonard, who helps run a six-acre farm with sheep and goats with his wife, usually practises on clay or hard indoor court surfaces but said he was comfortable with the grass at Wimbledon.

He said: “The grass felt like a clay surface, which I am used to practising on. Normally grass surfaces are a bit softer due to the warm weather but because it wasn’t hot the ground was actually quite hard.”

Leonard will now compete in the 2021 ITF Super-Seniors World Team and Individual Championships in Mallorca in October.

He said: “I will battle the world championships and then go back to competing in the nationals.

“Suzanne is coming with me and that’s the first time we’ll have been away in two years.

“She’s fantastic and a real horticultural genius — she’s very ecologically minded. She doesn’t play tennis but she keeps very fit and she was delighted for me.”