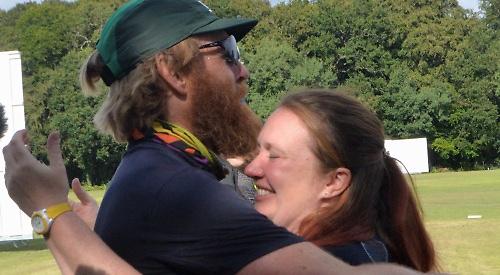 Tom Crossland, 40, of Reades Lane, Gallowstree Common, took part in the Run To Refuge challenge, which comprised 75 marathons in 85 days, beginning on June 2.

He raised £21,115 for the TRIBE Freedom Foundation, a British charity fighting to end modern slavery and human trafficking.

Mr Crossland, who is a clinical psychologist for the Berkshire Healthcare NHS Trust, ran around the English and Welsh coasts before finishing back where he started at Kidmore End Cricket Club, off The Hamlet, Gallowstree Common, on Saturday afternoon.

He was met by family and friends, including his wife Rebecca, 39, as well as pupils from Kidmore End Primary School who were wearing their red PE kits to cheer him on and ran the last 400 yards with him.

Young cricketers playing a match stopped play to watch him cross the line.

Mr Crossland, a former coach at Shiplake Vikings Boat Club, ran an average of 48km per day with two rest days a week.

He was accompanied by a support vehicle carrying his belongings and stopped every 10 miles to refill his water bottle. He stayed at
Airbnb properties each night.

Mr Crossland was unable to walk until he was three years old as his condition affects his ability to move and maintain balance and posture.

He still has daily training and strengthening sessions to help him run as it does not come naturally to him.

Mr Crossland, who was sporting a huge beard as he finished, said: “It went really well. I was pretty confident I could do it but until you cross the line you never really know.

“Even in the last few days I could have twisted my ankle or something.

“The first couple of weeks were pretty miserable as my legs were getting used to the new level of running and there were a few days of swollen knees and ankles.

“But after a few weeks I got into a rhythm and routine and my legs got used to it and it was a lot easier. There were days where it was tough but I carried on putting one foot in front of the other.”

His first destination was Henley, then London, north to Chelmsford and around Norwich.

He then carried on towards Newcastle upon Tyne before heading west to Carlisle. From there he ran south to Lancaster, Liverpool and Chester before following the coast of Wales round to Bristol.

He then continued running to Weymouth, Southampton and Brighton before heading north back to London and finally returning home to South Oxfordshire.

“I visited loads of places I’ve never been,” said Mr Crossland. “My highlights were Hadrian’s Wall in Brampton and the coast of West Wales, which was absolutely beautiful.

“I was really mindful to look up while I ran and experience the different locations, views and wildlife. I didn’t want to get home and just have seen tarmac.”

Up to 100 runners joined Mr Crossland on some of his marathons to keep him company. Many of them were strangers who had learnt about his efforts on social media.

He said: “The running community were absolutely amazing, that’s one of the big takeaways of this.

“Lots of people came out who I had never met and ran for the whole day or part of the day.” Mrs Crossland, who is a teacher at Reading Blue Coat School in Sonning, joined her husband with their dog, Bolt, for part of the challenge while he was in Pembrokeshire in late July.

Mr Crossland said he felt “relief” as he crossed the finish line.

He said: “It was just the excitement and joy of being home and seeing my partner again and being able to stop and spend time with her. It has been a long three months of not being together after many years of never spending any time apart.

“A big thank-you to everyone and to those who joined me on the big day. The community really came together. There are too many to name but thank you.”

He celebrated at the cricket club which had organised live jazz music by the Bob Christopher Quartet as well as cake, food and drinks.

Mr Crossland will return to work next week after “reintegrating” himself back into normal life.

He said: “I’m keen to try to use the small platform I’ve developed to increase awareness of modern slavery and, if possible, keep raising the funds.

“It’s really amazing to have raised the money as the Freedom Foundation is a small charity and every single pound counts.

“The amount of money we’ve raised will have a huge impact and will help them continue the great work they are doing.

“Now I am taking a little time to recover and giving myself a break.

“I may speak to local schools and businesses to see if they’re interested in me doing talks to raise awareness in the meantime.”