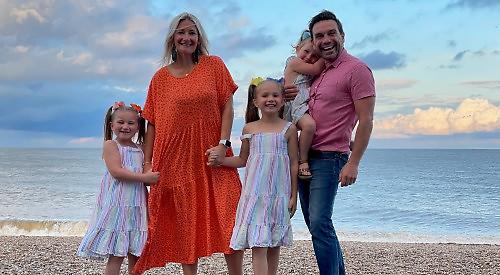 A FAMILY from Henley are to spend a year travelling around the world in order to research how to improve their lifestyle.

Anthony Campbell, 42, and his wife Katie, 36, and their daughters Tabatha, seven, Saskia, six, and Indigo, three, will leave at the end of this month.

The family, who live in Valley Road, plan to visit six intentional communities, which are groups of like-minded people who have chosen to live together and pursue a similar lifestyle, for two months at a time.

They then intend to return to Henley to make their own intentional community with a high degree of social cohesion and teamwork.

Mr Campbell, a film-maker, said he had been thinking about the idea for about 10 years and the coronavirus pandemic had encouraged him to finally pursue it.

He said: “It has got to the point where I can’t listen to the likes of Greta Thunberg or David Attenborough telling us the world’s on fire and not do something about it. While I love living in Henley and the life we have, I do have problems with everybody building their castles.

“I think something radical has to change for us to dig ourselves out of the situation we find ourselves in.

“Katie has always known about my ideas but with covid it gave me, like lots of other people, the chance to stop and reflect and really take the bull by the horns and make the decision to go for it.

“It’s a really scary thing as we’re cutting against the grain and taking the girls out of school.”

The girls, who attend Valley Road Primary School, will be home-schooled by their mother, who is a teacher at Newlands Girls’ School in Maidenhead.

They will also keep in touch with their teachers and school friends. Mr Campbell said: “The school has been completely supportive of us doing it and are doing what it can to support us with the girls on the road, so hopefully we will return and still have a real connection with Henley.”

Due to the pandemic, the family haven’t confirmed which six places they will visit but they hope to travel to Costa Rica, Scotland, southern Europe, Africa and Israel.

Mr Campbell, who is known by friends as “Campo”, said: “Israel was the first place we were going but they have just shut their borders so we have to be adaptable.

“All the details are yet to be worked out. We’ve connected with a few communities and have received a lot of support.”

Mr Campbell, who founded The Creative, a video production company in Newtown Road, said the family would make films about their research as they went along.

They have also partnered with Optimist Performance, a business consultancy company set up by former England rugby player Ollie Phillips, which will produce
academic reports based on the family’s research.

Mr Campbell said: “There are three things we are looking for. One is happiness and understanding what makes people happy.

“Two is sustainability and trying to work out a better way for us to live in this world which is sustainable.

“Three is intergenerational living and the way we look after the older generation.

“We tend to clump them altogether in homes and that’s not the way it works in others parts of the world.

“We’ve worked with Optimistic Performance on the type of questions to ask the people in these communities to get some data.

“Then we’ll also have the fluffy things which as a family embedding ourselves in these communities we can say what we think will work and what won’t.”

The family are funding their travels through Patreon, which is an online membership platform to which the family will provide updates to subscribers throughout the year. A subscription costs £3, £15 or £25 a month with varying content for each price.

So far, the Campbells have 58 subscribers and are earning about £658 per month.

“We’re also looking for brand partners,” said Mr Campbell. “We want brands that are aligned with our values and thinking. We did a video with Sainsbury’s recently about healthy food.”

The family are due to leave on September 30 and will be having a ticketed leaving party on Saturday, September 25 at Oaken Grove Vineyard in Fawley to help raise more funds.

Mr Campbell said: “I think the girls are really excited but they are a little nervous too — we all are.

“It won’t be easy but it’s something we’re going for. We’re quite an adventurous family.

“It would be fair to say the word people are using is ‘brave’ and there’s a thin line between brave and stupid.”