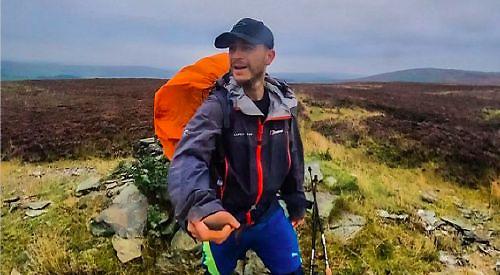 A MAN from Henley has completed a walk from the town to the top of Mount Snowdon, raising nearly £5,000 for charity, writes Jack Hudson.

Marco Barcella, who reached the summit of Mount Snowdon on Sunday, has suffered ligament and soft tissue damage and a suspected stress fracture because of the constant use of his feet.

The 36-year-old set off from his home in Marmion Road at 5.30am on Monday last week for the six-day challenge. He walked to Worcester in two days before moving on to Shewsbury and then made his way into North Wales and towards Snowdonia.

Mr Barcella said he was relieved to reach the top, particularly as he had been in constant pain since day three.

He said: “I mainly felt relief, thinking I don’t have to get up and do the same thing again the next day.

“But now that a little bit of time has passed it’s great to look at a map and look at what I’ve done and where I’ve been.

“It’s hard to describe how hard doing those kinds of miles is. It takes a toll on your muscles. I got bad blisters during the trip and in the following days in a lot of places.”

Mr Barcella struggled with navigation. He said: “I wanted to use public rights of way rather than walking on roads but many are completely overgrown, so a lot of the time I’d walk through somewhere to then find that the path didn’t exist.

“I’d have to turn back, which took up a lot of time and effort.” While he occasionally wondered if he would physically be able to keep going due to the pain, Mr Barcella said he just put his head down and kept going.

He has raised £4,865 so far for the Chiltern Centre, off Greys Road, where his wife Harriet works as a community fundraiser.

He said that charity and his sense of “privilege” at being able to do the challenge kept him motivated.

Mr Barcella said: “I do it because I can and because I want to show others that they can, too. Of course you don’t need to destroy your feet or hurt your legs or battle your way across the country but I do believe you should regularly go on an adventure in some way.”

At the end of his journey, Mr Barcella was driven home by a friend. He is now looking to undertake more challenges.

He said: “It was the hardest thing I’ve ever done on foot. I’ve done long distance cycling and swimming events which were very hard but I’ve never done this kind of long endurance on foot.

“I don’t know yet what my next adventure will be but there will definitely be something else soon.”