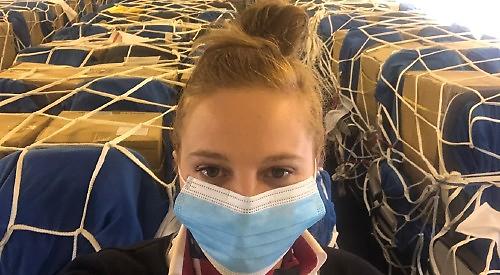 UNSUNG heroes of the coronavirus pandemic are to be celebrated at the Henley Festival next week.

People were asked to nominate anyone who has “made a difference” over the last 18 months.

Eighty-eight people were nominated and the winners will receive a pair of tickets for the closing night of the five-day festival, which begins on Wednesday.

Liz Wells, 57, of Harpsden Road, Henley, was nominated for her work as a carer for vulnerable people during the pandemic.

She has been caring for five people in the Henley area, doing their shopping, preparing hot meals and offering companionship.

Beth Bowden, who nominated Ms Wells, said: “She has tirelessly been a carer for multiple vulnerable people across the town during the pandemic, including my mum.

“I’m a young adult carer and the respite she gives us with her joy, kindness and laughter has kept us going in the darkest of days.

“She always puts others before herself, going the extra mile, and her positivity is infectious.

“I honestly don’t know what we would do without her.”

Ms Wells, who used to be a probation services officer, said: “Beth sent me a message telling me she had nominated me and I was so touched. Ultimately, I was just doing my job but it felt lovely for someone to think about me.

“The people I cared for became good friends of mine during the pandemic. I made sure they felt safe and they had someone to talk to.

“The work of a carer has always been important but I think that during the pandemic it became vital because these people couldn’t see anyone and could not leave their houses.

“It became even more important to go in and prepare their meals, make sure they had the right medication and that they felt safe despite everything that was going on in the world at the time.

“Some of their families live abroad so they needed someone to rely on and I felt I needed to do that for them. A lot of them are elderly and needed to see someone regularly — their faces would light up when they saw me.

“They would ask me why they couldn’t go out and I would explain it to them.

“We would do crosswords and chat and I would report to their families at the end of the day to make sure they knew their loved ones were okay.

“I was really glad I could go to work and I loved doing my job. I felt I was making a difference. It mademe feel worthwhile.”

Even after all the coronavirus restrictions were lifted, she was turning down invitations to go out.

Ms Wells said: “I made sure I was being extra careful. I would regularly test myself as I didn’t want to put any of them at risk.

“They relied on me and I knew that without me going in, it would be difficult for them. That companionship and talking about their day really helped them.

“I’m sure all the other carers feel the same. Being a carer is so important and to be recognised for it is lovely.”

Lidija Basic, 43, from Sonning, was nominated by her friend Sevim Gencer because of the emotional support she gave her during the lockdowns.

The women have been friends for more than eight years, having met when they worked for the same software company.

Ms Gencer said: “Lidija has been a great friend to me over many years but the support I received from her over the last year-and-a-half is beyond anything else.

“As a person living alone with no family members here, I struggled so much during the lockdown, both mentally and emotionally.

“Lidija and her partner Andy did everything humanly possible to help me survive in these unprecedented times.”

Ms Basic, who works in web security, was surprised to be nominated as a hero.

She said: “I really didn’t expect it and was really pleased. I feel quite emotional about it.

“The Henley Festival is one of the best events of the year and it’s great that they are doing something like this and promoting friendship.

“I was single for a long time and my friends were always there for me. All of a sudden I found myself in a very beautiful relationship during lockdown and I wanted to make sure that my friends were all right too.

“I was trying really hard to be there for them as I know how it is to be single during normal times and I imagined it would be difficult during the pandemic.”

In March last year, when the first lockdown started, she organised weekly calls with friends living across Europe.

She said: “We had them religiously every Thursday and we managed to forget about everything else that was going on and enjoy these evenings to the fullest.

“We chatted about everything and we went through the ups and downs together. Some people had lost their jobs, found new ones or even moved house. We looked forward to that time together every week.”

Alexandra Green was nominated by her mother because of her work as a cabin crew member.

The 32-year-old, of Deanfield Road, Henley, has worked for British Airways for more than eight years.

When the pandemic hit, she worked voluntarily on repatriation flights to Goa, Dhaka in Bangladesh and Ahmedabad in India.

She would try to sleep on the flight out and bring the passengers straight home, meaning she worked 22-hour days.

She also worked on flights to Shanghai and Beijing, helping to bring thousands of boxes of personal protective equipment to the UK. On her days off, she was part of the Henley Mutual Aid Group, helping people in the community.

She did shopping trips for neighbours as well as collecting prescriptions and other goods that people needed.

Ms Green said: “When the pandemic hit, a lot of my colleagues were put on furlough and I decided to volunteer to work during the repatriation flights.

“We flew to places we normally don’t fly to and that could result in 10-hour flights sometimes.

“I had to be really careful when I came back home as I was living with my mum and had to take my uniform off at the door.

“Since I had a lot of time off in between and after these flights, I also did the shopping for my neighbours and built a very good relationship with some of them.

“A couple in particular, who are 89 and 92, couldn’t leave the house so I was making sure I chatted to them regularly as they had no one else to speak to.

“It was a difficult time for a lot of people and at the time you don’t really think about anything, you just want to do as much as you can to help other people.”

Ms Green said she felt overwhelmed to be nominated, adding: “Your mum is always going to be proud of you but having the recognition from the festival is nice.”

Catharine Darnton, who has been headteacher at Gillotts School in Henley for the past 13 years, was nominated because of her efforts in supporting families and students.

She was nominated by Denise Williams, a member of the school suppport staff, whose daughter was in year 11 and had her final year disrupted.

She said: “I am in awe of the hours and hours [Catharine] has committed to her students and her staff team. She honestly hasn’t had a break and continues to support some of the most vulnerable families in our town.

“She deserves a medal for simply making the Department of Education guidance workable, let alone run a track and trace system and an exams programme and keep the school open throughout.

“She isn’t alone and many teachers and staff deserve the recognition but I’m not sure any would disagree she would be a worthy recipient.”

Ms Darnton said: “It is an absolutely lovely gesture by the Henley Festival and I’m incredibly touched that it was one of my colleagues who nominated me.

“It has been a team effort to get through these times and I could not have done it without my team — they really stepped up. Everyone needed to be innovative and creative.

“During the pandemic, schools in many towns across the country have been at the centre of the community in a way they weren’t before and it was the same for us — we are all about our community.

“While people were at home from school, we needed to be creative and find ways to deliver remote teaching but also support our students and parents.

“Parents were incredible in handling it and I know they were really grateful schools were there for them.

“It took us a long time to get used to it and we are still in covid times, just in a different phase, and it’s going to take time to come out of it and it will continue to pose a challenge for us.”

Hayley Rogers, head of PE at the school, was also nominated by Ms Williams, who said: “She is an absolute rock and led the staff team in school throughout the lockdown, supporting the most vulnerable students and providing security and consistency.”

Jo Bausor, chief executive of the festival, said: “We were thrilled with the number of nominations we received. We wanted to give people a chance to say thank you to those that helped them during the pandemic.

“We hope the nominees will enjoy the night.”

• Key workers are being offered cheaper tickets to Henley Festival. Pairs of seat tickets for Sunday, September 19, are being offered for £25 instead of the normal £65. For more information, email julia@henley-festival.co.uk