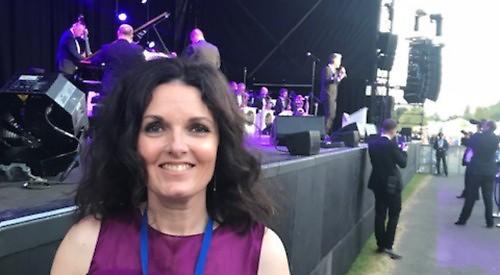 Jo Bausor said it was her “wildest dreams” how successful the five-day event was which featured performances from Madness, James Blunt, Sophie Ellis-Bextor and Sara Cox.

The festival, which usually takes place in July, returned after a year off due to the coronavirus pandemic. It was postponed this year by two months in line with the Government’s covid-19 safety guidelines.

Despite the postponement, Mrs Bausor said the visitor numbers were the same and although the evenings were darker and colder, the guests were still happy.

She said: “From a planning point of view it all came together really well and the site looked absolutely beautiful and the audience was absolutely wonderful.

“Everyone was so joyous and happy to be out and everyone made an effort to dress up. The support was second to none.

“In terms of visitor numbers it wasn’t much different from previous years but it did get darker earlier. I think it contributed to the atmosphere as we were able to have more lighting and it gave it a different feel.

“We were also so lucky with the weather – it was more chilly in the evenings but it wasn’t too bad.”

Festival staff ensured the safety of guests by having visitors show a negative lateral flow test of proof that they were double vaccinated.

Mrs Bausor, who became executive chief in January after having the job on an interim basis for three months, said staff wanted to make sure that guests felt safe.

“Administratively it was a lot of work,” she said. “But I think everyone dealt with it very well and the audience was great and very helpful and not worried that they had to queue for a bit longer.

“We had a lot more hand sanitiser stations everywhere as well – it was just another level of administration.

“We did have two acts pull out because of covid, one from the jazz club and one from the comedy tent, but it didn’t impact us too much.”

A total of about 26,000 people attended the festival over the five nights, with Friday being the busiest, compared with the 25,138 people in 2019.

Mrs Bausor, who was the festival’s head of marketing for nine years, said: “We had an emergency drinks order as Henley really wanted to party. It was on the Friday, we felt it had gone well on Wednesday and Thursday and if it continued we wanted to make sure we were fully stocked.

“We’ve had so much positive feedback from the audience, the sponsors, the patrons, so many, but the one that really stood out for me was, ‘Team Henley Festival, you smashed it,’ and for me that was just brilliant.

“The team really did smash it and they went above and beyond and have for months and months beforehand.

“It didn’t matter if you were exhausted because when you saw the big crowds getting ready to come in it just made it all worthwhile.”

Mrs Bausor, who lives with her husband Daniel and two children in Bix, is now looking forward to celebrating the festival’s 40th anniversary next year, which she said would be “a privilege” to oversee.

She said: “We’ve got to do something really special for that. We’ll be going back to our usual spot in July but there are certainty things we’ll keep from this year.

“We’re looking forward for a big one, 40 years is an amazing achievement and we want to celebrate it.

“I would just like to say thank you to everyone who came because it’s the audience that makes the event. Everyone was so supportive and wanted us to do well and all had a wonderful time and it made it worthwhile.

“I was thrown into the deep end being made chief executive but I couldn’t have asked for it to go any better.”

Next year’s event will take place on Wednesday, July 6 to Sunday, July 10.

For full coverage of the festival, see this week’s Henley Standard.