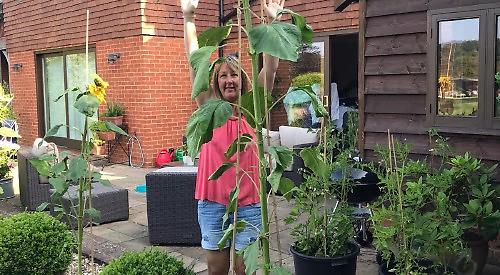 Claire and Brandon Murdoch moved to the village with their sons, Nicholas,15, and Robert, 13, and her mother Valerie Gresty in November. They previously lived in Dunsden Green.

Mrs Murdoch learned about the competition from the village’s WhatsApp group and was given some seeds by the organiser Sue Remenyi.

Mrs Gresty, 79, planted four seeds in the garden of their home in Wood lane and three sprouted.

The tallest sunflower grew to 8ft 5in, almost five inches higher than the next biggest entry.  Mrs Murdoch bought some bamboo canes to support the plant.

She said: “I originally had some sticks but they outgrew them so I had to get some new ones. I thought, ‘They will never be bigger than these sticks’ — I couldn’t even close the car boot they were so long — but they did.”

Mrs Gresty looked after the flowers, watering them every day. “It was nice as it was something for mum to do,” said Mrs Murdoch. “But it was a bit embarrassing to win in our first year.”

After being declared the winner, the sunflower was blown over by the wind and snapped. However, the family have kept some seeds from the giant yellow head to plant next year.

“We’re absolutely taking part,” said Mrs Murdoch. “I have to defend my title.” More than 100 plants were entered in the competition, which was in its second year.

Mrs Remenyi, of Tokers Green Lane, came up with the idea in March last year after the first coronavirus lockdown began.

She said: “As we were still in lockdown in March, the competition was launched again and the uptake of seeds was as strong as last year. With the cold wet spring, followed by a heatwave and then a dreary summer, the results were varied.”

The runner-up was Sarah Wilkinson, who won the inaugural competition, with a sunflower just over 8ft. In third place was Rhiannon Davidson whose plant
measured 6ft 8in. Sheila Forde grew the smallest sunflower of about 4in.

The results were announced at the parish picnic held at the cricket ground in Gallowstree Common. The winner’s prize was a clay plaque made by the village potter Debbie Page with smaller versions for the runners-up.