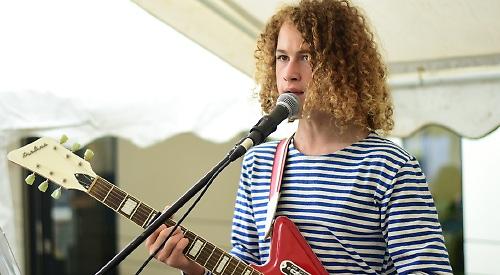 More than 500 people attended the fourth annual event at Dry Leas, which could not take place last year due to the coronavirus pandemic.

It ran from noon to 11pm and coincided with the Henley Hawks’ match against Clifton.

Visitors could choose from a selection of about 20 beers, including some provided by the Loddon Brewery in Dunsden Green.

There was a bouncy castle, face-painting and zorbing for children along with a burger van.

Live music was provided by Adam Isaac, a quarter-finalist in The Voice in 2012. Guitarist Felix Richardson, 13, of Deanfield Avenue, Henley, performed with his 11-year-old sister Didi on drums.

Alistair Beynon, commercial manager of Henley Rugby Club, said: “We were blown away by the number of people that came. We pretty much sold out of each beer.

“This is the fourth year we’ve held the festival and I would say it’s getting bigger. When we first started, it was just a beer festival but now we see it more as a family event.

“We have increased the number of bands so that we can have live music throughout the day and that has made it much more of a festival.

“It was great to give Felix and Didi the opportunity to play in front of a crowd at their young age.”

Collections were taken at the festival in memory of David Hyde, the Hawks’ player who collapsed and died after a match last month.

Nearly £84,000 has now been raised for his family, mainly through an online donation page.

To make a donation, visit gf.me/v/c/pxfl/david-hyde-fund