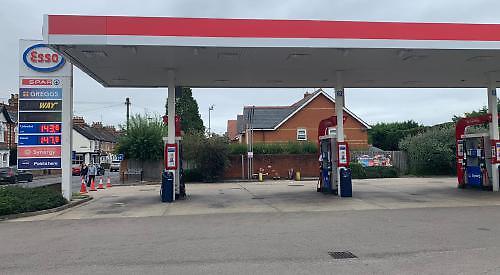 The Henley MP said there was no shortage of fuel and accused the media for exacerbating the problem.

He was speaking after long queues formed at filling stations as drivers scrambled to fill up before the pumps were emptied.

The problem was caused by a shortage of lorry drivers which led to delays in fuel deliveries.

However, it was appearing to ease this week as more deliveries were made and the high demand seen at the weekend slowed.

Filling stations were forced to close temporarily or introduce a maximum £30 limit due to demand.

Mr Howell said: “I’m obviously very concerned and in particular about the emergency services if they are struggling.

“But I do think this is a result of panic buying when there is no shortage of fuel in the refineries.

“The fuel industry said people will go back to their usual consumption in two to three days. Personally, I do have a lot of blame to put on the media for the panic buying and I do not support it. I have not filled my car up.”

The Esso garage in Reading Road, Henley, closed at lunchtime on Saturday when it ran out of both diesel and supreme diesel.

A forecourt sign read: “Due to the current unprecedented customer demand for fuel and associated supply challenges, we have taken the decision to introduce a limit of £30 per customer on all  our grades of fuel. This excludes HGV drivers and the emergency services.

“This is a company decision to ensure all our customers have a fair chance to refuel and to enable our sites to carry on running smoothly.

“We kindly ask everyone visiting our sites to treat our colleagues, supply chain partners and customers with respect during these very challenging times.”

The Esso garage in Knowl Hill, Wargrave, was  closed over the weekend due to the lack of fuel. Queues of cars built up at Sonning Common Garage.

Managing director Philip Mullin said: “People are going from one station to the next.

“The biggest concern is the queue which is going down the road. We’re trying to get a one-way system but on occasion we have people trying to come in from the other way and cut to the front of the queue.

“We’ve limited it to £30 per car to try to get through the queue quicker. Providing fuel is not our main business and it’s difficult for the maintenance and MOT side of things as the guys can’t get the vehicles in or out.

“We first noticed the problem on Friday  as we had a queue outside and normally it’s quite quiet. We had a queue all day and we had to shut at 2.30pm as we had run dry.

“Lots of people think we’re making money from it but you only make money if you have a Greggs or a Costa inside. We’re only a small shop and there’s no money to be made from fuel.”

Mr Mullins had a delivery of fuel on Monday but was expecting to run out again before his next scheduled delivery yesterday (Thursday). He said: “Hopefully by next week it will have calmed down a bit.”

Businesses that rely on fuel were also suffering, including Regatta Car and Van Hire in Newtown Road, Henley, where trade virtually vanished.

Peter Lucas, co-founder, said his said: “We’ve noticed a drop over the past week. People are concerned that if they rent a vehicle they won’t be able to fill it up when they return it or they will get stuck somewhere. They don’t want to take the risk.

“Local people are probably more confident as they won’t use as much fuel but people who want to use a van, for example, are probably needing it to travel longer distances so they are a bit worried.”

Asif Choudry, managing director of Henley Taxis in Market Place, said: “Like everyone else, we’ve been waiting in long queues. We’re carrying on as normal and if we can’t get fuel in Henley we have to go into Oxford — you can find fuel somehow.

“We’ve noticed these issues since the end of last week but filling stations have more deliveries coming in now so fingers crossed it goes back to normal.”

Lizzie Gloyens, quality and compliance manager for Henley Care, a home healthcare service, said care workers should have been a priority for getting fuel like NHS staff. “We’ve just been queuing for it and just doing what everyone else is doing,” she said.

“We’re trying to keep staff updated on what petrol stations are opene and we’re doing okay as long as it doesn’t go on for much longer.

“Hopefully it will resolve itself soon or I can imagine it would have a more detrimental effect.”

The Government has  suspended competition law to allow oil firms to target fuel deliveries at petrol stations in parts of the country that need it most. It was  also considering deploying the army to deliver fuel.

Mr Howell said: “The Government has done everything it can to make sure the situation can be managed.

“The problem won’t be solved long term by getting more HGV drivers. Those who are wanting to go back to the old system need to bear in mind  drivers have nowhere to stop that’s safe and they have  to sleep in cabins and go to the toilet in a field and are paid pennies. That’s no way to run an industry and that needs to be solved first.”

The lack of HGV drivers has hit other industries, including pubs, breweries and farms.

It is estimated that the UK is short of about 100,000 HGV drivers, which has been worsened by the coronavirus pandemic and Brexit.