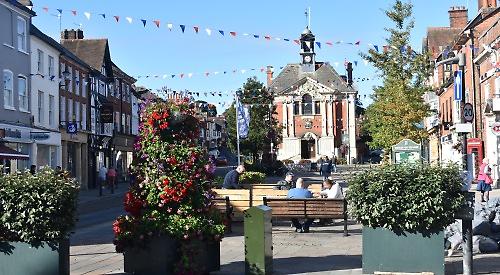 A DEVELOPER has warned that Henley is in danger of becoming a “Disneyesque retirement and tourist location” if more affordable housing is not built.

He blamed the shortage of affordable homes on a “virtual embargo on housing development in the last 30 years of the last century”. His comments came more than 10 years after he wrote to the Henley Standard warning that Henley was becoming “a rich old people’s ghetto”.

Mr Pontin, who was behind the 98-home Crest Nicholson development of the former Highlands Farm industrial estate off Greys Road, was speaking at a virtual meeting of the Henley Society, a conservation group, on Thursday last week.

Mr Pontin said: “A thriving town needs to allow for some growth in the formation of new households, whether it be for our children, our grandchildren or other useful citizens. Otherwise we stagnate and become a sterile Disneyesque retirement and tourist location with schools under pressure through lack of pupils and surgeries overflowing.”

He said that from 1970 to 2000 Henley had produced 25 per cent fewer homes per head of population than the rest of Oxfordshire.

Mr Pontin said: “It is sad to compare this housing provision with the achievements of our Victorian and post-war counterparts.

“After the Second World War many residents came from elsewhere and were given temporary tented accommodation.

“Many moved to the Abrahams estate, Luker Avenue and Mount View. Later the development of the almshouses, Watermans estate, Gainsborough Hill, Makins Road and Manor Road amounted to 1,000 homes.”

However, 40 per cent of these affordable homes were now in private ownership as a result of Margaret Thatcher’s Right to Buy scheme of the Eighties.

Mr Pontin, who lives off Mill Lane, said there were increasing numbers of younger people running businesses in Henley who commuted to work because they couldn’t afford to live here.

He invited his audience to consider who cut their hair, saying that 80 per cent of Henley’s hairdressers lived outside the town.

Mr Pontin added: “People we need to keep the town thriving are being excluded.”

He said the problem was made worse by younger people being disenfranchised in decision-making, noting that the age profile of attendees at a recent neighbourhood plan exhibition was “advanced”.

He suggested this might be due to their sense of despair at not being able to afford to live in their home town. He also noted that town council meeting times didn’t encourage those in work or with parental duties.

Mr Pontin said: “The average age of a first purchaser of a home is now 34. I would ask our members to consider what age we were when we managed to purchase our first home. Are we being selfish in not giving them an opportunity?

“We can all remember our first home purchase and what a positive impact, a psychological sense of achievement and goodwill it gave.”

He also lamented the increase in holiday lets, saying that an online search showed that more than 200 were currently available in the town. “I’m concerned that sometimes we give more favour to visitors than we do to our own homegrown community,” he said.

Mr Pontin said the Henley Society had started in 1962 as a protest group opposed to the building of a hotel in the town centre and that it should now take a role promoting rather than opposing development.

He said: “It is easy to find fault with the process or design of a building but that negativity can disenfranchise us from involvement in the whole process. We should seek to shape and demand the right scale and type of housing for Henley and not employ arguments to avoid delivering homes to the town.”

Mr Pontin said Henley’s housing needs assessment showed the town needed to provide 1,300 affordable homes, owned and rented, in the next 16 years. This would be 81 houses a year compared with the seven currently being provided.

He said this housing needed to be truly affordable and not, in Henley’s case, 80 per cent of the normal market rate because that was unaffordable for a lot of people.

He acknowledged housing must be built sympathetically, saying that the money raised from section 106 contributions, where developers pay towards improve infrastructure improvements, could be used to tackle congestion and fund parking and cycleway improvements and carbon-free public transport.

He added: “New houses must use the best available sustainable building technologies, meet the highest ecological landscaping and garden specifications and protect and enhance biodiversity, ecology and wildlife.”

Some society members argued that Henley couldn’t take any more homes and that green areas should not be built on.