May Fayre ‘not to clash with Queen’s jubilee celebrations’ 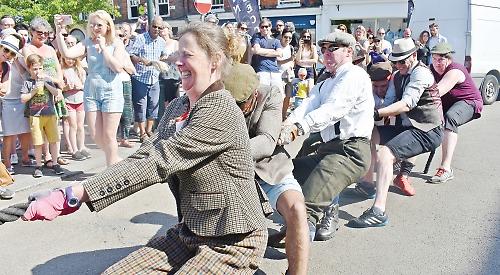 NEXT year’s Henley May Fayre is unlikely to be held on the same weekend as the Queen’s platinum jubilee celebrations.

Mayor Sarah Miller, who organises the annual event, said the fayre was primarily for children so should be kept separate rather than be moved to the special bank holiday weekend from Thursday to Sunday, June 2 to 5.

The suggestion to merge the celebrations came from Nicci Taylor, administrator for the council’s events sub-committee, who said that otherwise there would be two large events within a few weeks of each other.

But Councillor Miller told a sub-committee meeting: “The May Fayre is about kids and I don’t think there is a reason why it has to happen on that bank holiday.

“Since I have been organising it, a lot of people do tend to go away.

“Perhaps we can arrange it for a Saturday or a Sunday. I don’t know about combining the two events.”

Philippa Ratcliffe, of Experience Henley, agreed, saying: “I think it should stand alone as it is an annual thing.

“It doesn’t have to be massive, it is just a really nice traditional town centric event.”

Town clerk Sheridan Jacklin-Edward suggested compiling a report with suggestions on what activities could take place to celebrate the Queen’s milestone.

He said: “We can put together a list of pros and cons for each one and costings so we have a framework within which to make suggestions.”

Mrs Taylor said lighting the town’s beacon had been suggested and it was likely that there would be street parties.

Councillor Donna Crook suggested a party should be held at the town hall for the town’s pensioners as they had missed out on their Christmas party last year due to the coronavirus pandemic and it would give them something to look forward to.

Meanwhile, an event to celebrate Dusty Springfield could return to Henley as long as it doesn’t clash with a similar event elsewhere.

The singer died in the town in March 1999 following a battle with breast cancer and her ashes were scattered in the churchyard at St Mary’s Church in Hart Street.

Cllr Miller wants to revive the celebration that used to take place at the former Slug and Lettuce pub in Bell Street, which is now Coppa Club.

A celebration event takes place in Ealing on the closest Sunday to the singer’s birthday on April 16 and is organised by her friend, music producer Simon Bell.

Cllr Miller said she had been in touch with the organisers who had requested that any event in Henley should be separate.

She said: “Dusty Day does happen in Ealing, although it used to happen in Henley.

“I have spoken to the organisers and they are very happy that we do it but not on the same day and we are not to call it Dusty Day.

“We will celebrate her and her music but we won’t call it that. I have had a lot of good feedback to say could we do it again.

“She does have a lot of followers and fans and she was very much-loved. I will report back to the next meeting.”

Cllr Miller said she would speak to Mike Hurst, who lives locally and performed with The Springfields.

• The council’s Health and Wellbeing Festival, which had been scheduled for October 31, has been postponed until next year. It may also be moved to the summer and possibly held on Mill Meadows.