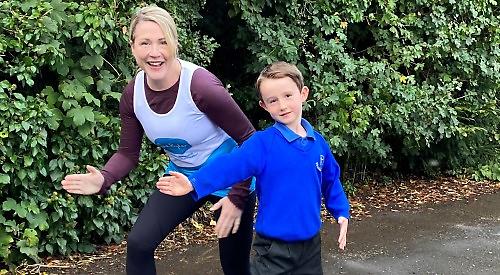 A MAN taking part in the Henley Half Marathon on Sunday will have an extra spring in his step.

Mark Murphy’s wife Rachel is expecting their third child 10 days after the event, so he will be hoping to get round the course as quickly as possible… just in case.

Mr Murphy, 38, from Wargrave, said: “We’re expecting a little boy on October 18 so if I get a phone call I may find myself having to sprint the last 10 miles.

“I like running and generally keeping fit and the half marathon is a good distance, which I have done before and have really enjoyed it.

“This is a great race and it is really good to support local events.

“The route and the atmosphere for the runners is fantastic with families all coming down to support on the day.”

Mr Murphy works for train operator Avanti West Coast and his wife is a publicist.

They have two children, Margot, four, who attends the Piggott Infant School in Wargrave, and two-year-old Ethan, who has Down’s Syndrome and attends Cedar Park School in High Wycombe.

Mr Murphy is a trustee of Chattertots, which helps children with Down’s to learn to speak and
communicate.

TV journalist Sophie van Brugen will be running the half marathon to raise money for Sue Ryder. The charity’s nurses cared for her mother Susan before she passed away in September last year.

Mrs Van Brugen, 41, who lives in Shiplake, said: “She was at home with me and the nurses came daily, three visits a day and they were with us for 10 days before she died.

“They were so calm and caring and everything was done with love and compassion. Their mantra is you treat the patients as if they are always conscious, even though they might not be. They are really bright and breezy and positive and really comforting.”

Mrs Van Brugen, who works for the BBC, has raised more than £1,500 so far. She has been training for Sunday’s race with some help from her sons, Rufus, nine, and Miles, six, who attend Shiplake Primary School.

She said: “I have stepped up the training quite a lot in the last few weeks and I have been going out three or four times a week. I have a running machine that I use when the weather is bad.

“The training has been a really good focus for me because I am doing something positive while trying to keep myself fit, which helps when you have two young boys.

“Miles has come out with me and can do about 5km before he becomes tired while Rufus has been making me do sprints up and down the road so I have my own little cheerleaders.

“I’m not looking forward to the hill. When I did it once before — about 10 years ago — I can remember the collective groan when we came to it.

“There is a hill in Shiplake off Mill Lane which I have run up and down but it is not as steep.”

This year’s half marathon, the 36th, and Henley Standard 10km will both start and finish at Borlase Field, next to Henley Rugby Club, off Marlow Road.

The main race follows a route over Henley Bridge, along Remenham Lane to the Flower Pot pub at Aston, back along the towpath and over the bridge.

During the race sections of Marlow Road and Bell Street, New Street and Riverside and the road leaving the town over Henley Bridge will be closed to traffic.

All the runners are chip-timed and all finishers receive a medal.

Places will be available on the day. Competitors can register from 8.30am with the races starting at about 9.30am. The cost of entry is £35 for the main race and £30 for the 10km.