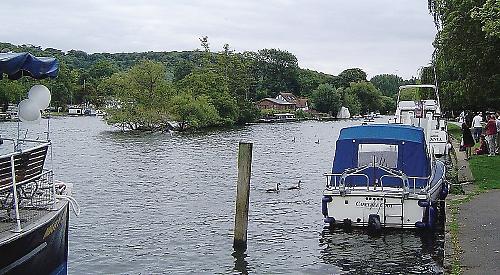 RESIDENTS of a river island in Henley will not have to pay a mooring fee after all.

Henley Town Council planned to introduce a permit costing £290 per year for people living on Rod Eyot to moor their boats at Mill and Marsh Meadows outside the hours of 10am and 3pm.

However, after a backlash from the residents, it has scrapped the idea and instead is to bring in a boat ID scheme, which will be free of charge.

The islanders had accused the council of not understanding river life and complained that the mooring fee was based on visiting boaters staying overnight while they just wished to pop over for short periods in small boats.

They said they wanted to be treated as Henley residents, even though the eyot is in Wokingham borough.

Each resident will be able to apply for up to two boat IDs, which will be in the form of either a card in a plastic wallet or a sticker to be displayed on the boats while moored. They must provide proof of residence and a boat licence.

Visitors mooring on the towpath pay £10 per day or £55 per week with a maximum stay of 14 days.

The daily fee technically applied to the islanders when they used the moorings but it was not enforced until recently when the council hired a specialist company to enforce the charges on the towpath, with regular checks and fines for anyone breaking the rules.

The council has assured the residents that they will not face fees while the boat ID system is put in place.

Islander Ann Tully has given the council the names of residents’ boats to try to avoid any mistakes.

Speaking at a council meeting, Ms Tully said she was grateful for the issue being resolved.

She said: “We want to be part of Henley and be considered Henley residents. The towpath is our pavement and we just want to be able to easily pop into the town.

“When things go bad people are very verbal in ranting and raving but I think that although this didn’t start off well, a little bit of communication has been quite fantastic.

“We’re very grateful that we seem to have found a way forward and we’re not quite as restricted as we thought we might have been.”

Mayor Sarah Miller replied: “It’s important that we talk and that you know you can talk to us and you can come to meetings.

“Sometimes things can get lost in translation but we can always resolve things.”

Councillor Kellie Hinton apologised for her comments at last month’s meeting of the council’s recreation and amenities committee where residents complained about the proposed mooring fees.

At the time, she told them: “You may be a neighbour but you don’t pay council tax to us. If we charged at a weekly rate of £55 it would come to just under £3,000 a year and the proposal isn’t even 10 per cent of that.

“I think the proposal is actually cost-efficient. If you don’t want to use it then fine. If you want to come over this side then, yeah, there should be a cost to it. Our residents pay so residents in the next district should.”

Simon Loring, who also lives on Rod Eyot, was asked to leave the meeting after responding.

He said: “I’ve had enough of this; you’re going to be in court. You’re breaking the public rules of the towpath. It’s a joke. You need to get lawyers.”

Cllr Hinton told last week’s council meeting: “I think it was quite regrettable and I’d like to apologise for any offence caused to island residents.

“After a meeting with residents, we can be assured that, moving forward, communication will be better.”