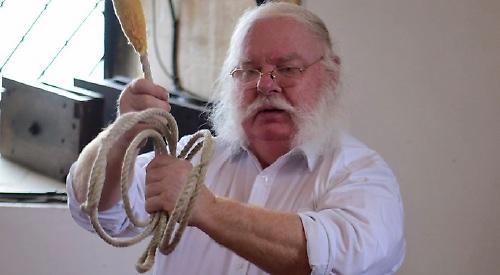 AN appeal has been made for new bell-ringers at St Mary’s Church in Henley.

It comes just three weeks after the church bells were rung for only the third time since the start of the coronavirus pandemic more than 18 months ago.

The 10 existing band members have an average age of around 70 and say that younger people are needed to keep the tradition going.

They have to climb a 60ft spiral staircase to reach the belfry where there are eight bells ranging in weight from 21cwt — more than a tonne — to 6cwt.

Volunteers can be as young as 14 but the bell-ringers say the hobby would best suit people in their forties and fifties.

They would particularly like to hear from anyone who has tried campanology before.

Paul Thomas, 74, of Makins Road, Henley, began bell-ringing when he was in his mid teens and says he finds it “fascinating”.

He said: “The original idea to ring bells was to bring people to church for Sunday morning worship and that is still the fundamental idea.

“Over the last 200 or 300 years it has developed into quite an intricate pastime. You can ring a bell and make it go dong or ring it with others in a sequence. You can get quite intricate ring changes.

“Sometimes a conductor will give you changes, then there are mathematical sequences where you are never ringing the same numbers twice.  We don’t call it music because we don’t play a tune as such.

“The attraction is about handling the bells and learning the methods and making a joyous sound by being in sequence.”

Mr Thomas has been ringing the bells at St Mary’s for three years, having been encouraged by his wife Linda. He said: “My father was an Anglican vicar and we lived in South Wales and I started bell -ringing at age 14 or 15.

“I went to university in Newcastle and rang there in the cathedral and outlying churches. I must have spent more time ringing than I did with my studies, although I did get my degree in microbiology.”

He stopped bell-ringing when he started work as a microbiologist and married his first wife with whom he had two children.

Mr Thomas said he wanted to keep ringing the bells but would have to stop eventually.

“I am in my 70s and there comes a time when all our ringers will need to stop,” he said. “The average age of us is around the 70 mark, so we need some young blood.

“I don’t want to give up just yet as I am reasonably fit and strong but I won’t last forever.”

Judith Phelan, 73, of Deanfield Road, Henley, began learning to ring the bells in 1996 so she would be able to take part in the national celebrations to mark the new millennium.

She said: “I decided to do it because I thought it might be interesting. It is a skill but it is rather fun to keep doing it and try to be a little bit better.

Mrs Phelan is keen to hear from people who have rung church bells previously but gave it up and now have time to do it again.

“That would be a quick remedy to our problem,” she said. “We have about eight or 10 ringers but where we used to have about 12 people who lived locally, we now have only about five or six who live in Henley.

“It would be a lot easier for somebody in their forties or fifties who wanted to come back to it. It is a bit like riding a bike — if you have already learned it, it doesn’t take long to pick it up again.”

Mrs Phelan, a retired teacher, said she knew of one family whose teenagers rang church bells and put it on their UCAS admission forms and got into Oxford University.

She said: “Bell-ringing is something that is unusual and worth saying that you do. You don’t have to be 18 to start, you can start age 14.

“For someone in their fifties it might take about two years to learn whereas we had some kids at Shiplake College who practised every day for a week and afterwards found they could handle the rope.

“You do need to be reasonably fit but there is a knack to it, which is why little old ladies in their eighties can do it.

“When you first start it is extremely strenuous because you tend to overpull but you learn to let the weight of the bell do most of the work.”

At 69 years old, Caroline Leeming, from Remenham, is the youngest of the St Mary’s bell-ringers.

She said: “I started doing it because I loved the sound of the bells every time I walked by and I thought I would like to try it.

“I used to be a night nurse at Townlands Hospital and I said to myself that if my hours changed I would start taking lessons.

“That happened and I found it to be wonderful. It is great fun and you get to do events such as weddings.”

Mrs Leeming recalled one occasion when someone was unhappy about the sound of the bells.

She said: “There was an alternative festival where plays were held around the town.

“Someone was trying to stage a play across the road at Hotel du Vin which featured an execution.

“Every time an execution happened a bell was rung so this actor turned up and asked if we could stop ringing the bells for a bit because it was ruining the play.”

Mrs Leeming, who is married to Christopher, has now rung the church bells for 13 years.

“It makes me feel better,” she said. “Ringing the bells is really uplifting and you just feel better when you have finished.

“It pulls one’s shoulders out so I don’t feel stiff afterwards.

“I also love the tower as it is the most mysterious place.”

Rev Jeremy Tayler, the rector of St Mary’s, said: “It is wonderful to hear the bells ringing out the call to worship once again on a Sunday morning, so I give a ringing endorsement to the call for younger ringers to come forward to ensure the future of this great tradition at St Mary’s.”

Bell-ringing practice is held on Monday evenings. If you are interested, call the parish office at St Mary’s Church on (01491) 577340.