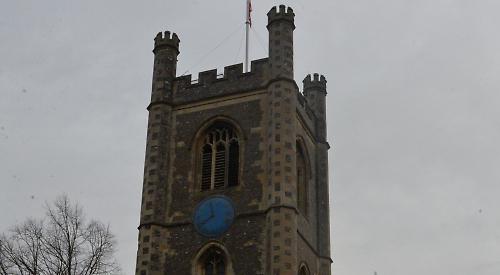 THE clock at St Mary’s Church in Henley has stopped working.

An electronic winding system was installed in July 2019 after Norman Topsom, who used to wind the clock by hand every four days, retired after more than 40 years.

Mr Topsom, of Gainsborough Hill, used to climb the 60ft spiral staircase to the belfry, then attach a large iron handle to the Victorian winding mechanism and turn it more than 100 times. However, he become too old to continue.

This was replaced with the new system, which has now developed a fault. Jeremy Tayler, the rector of Henley with Remenham, says it was not known what the problem was but an engineer would be visiting later this month to try to fix it.

The pulley system is outside the casing of the clock and is dangerously near the bell ropes of the two heaviest bells so only six of the eight bells were in use for some time.

Rev Tayler said the boxing-in of the pulleys had been delayed due to the pandemic and the associated national lockdowns.

However, this work had now been completed so all bells could be rung again.