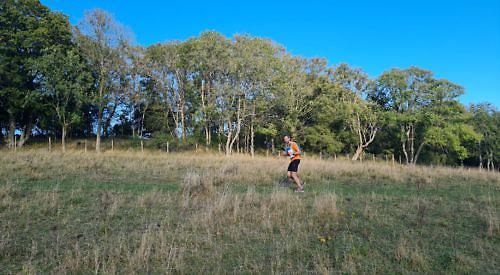 A MAN from Stoke Row ran 139 miles to raise money for the village primary school.

David Pryce, a former governor of the school, took on the Chiltern Way in a non-stop challenge.

He set off from the school at 8am and followed a circular route that took him as far as Luton before he returned and finished back at the school just under 33 hours later.

Mr Pryce, a keen ultra-runner, said: “It was tough going at times but I kept plugging away.

“My usually cast-iron stomach abandoned me, meaning that I was unable to fuel properly from the start and preventing me from keeping down any food between miles 50 and 90.

“This made maintaining energy levels more tricky than usual. As a result, slow and steady was the order of the day.

“Luckily, the weather was kind. Heavy rain had been forecast but in the end it only rained for about the last seven hours or so. Until then the conditions were pretty perfect, with soft but dry trails and cool temperatures with frequent blue skies.

“The total distance covered was just over 139 miles, partly as a result of wrong turns and partly a long detour around a building site thanks to HS2.

“Overall it was a brilliant experience and all the more satisfying for having to find a way to get to the end when things weren’t going to plan.”

He was joined by a number of parents at different stages, including Robyn Polisano, Rachael and Ryan O’Sullivan, Nick Blaker and Adam Shaw.

He also carried the school’s mascot, Ellie the elephant, around the course and on the very last section was joined by pupils who had been practising in their running club.

He said: “The highlight was being joined for the last 100m by the children.” Mrs Polisano, whose daughter Lilly is in year 3, said: “I’m not an experienced runner so I chose to join David at the end of his run when the pace would be slower.

“I ran from Turville to Nuffield and did around 7.5 miles. It’s such a beautiful route and breath-taking even in the pouring rain.

“I honestly would not have been able to tell that David had run 132 miles non-stop when I met him at Turville.

“It wasn’t until we had to climb a fence to detour around some cows that he showed any sign of discomfort. Seeing the children from the running club at the finish line was just brilliant. They were so excited to take on the baton and to get running.”

Laura Shaw, whose daughter Ophelia is a pupil, also took part in some of the run.

She said: “It was an awesome event that brought our community together after what seems like a lifetime apart.

“I am most proud of our runners for truly embodying the school values of perseverance, courage and excellence. The running was tough for everyone, no matter how much training they had done. Despite this, everyone finished their part with a smile.”

Mr Pryce raised more than £5,000 for the Friends of Stoke Row School.

Emma Taylor, who chairs the Friends and whose son, Gabriel, seven, is in year 3, said: “The school has been hit hard by ever-tightening budgets and the impact of covid-19.

“We are so grateful to David for this heroic effort and to all the parents and children who challenged themselves.”