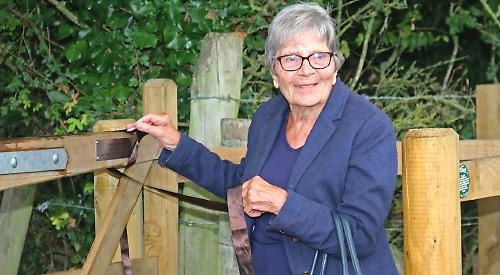 A KISSING gate and plaque have been installed in Kidmore End in memory of a man who loved the countryside and walking.

The 72-year-old died in January last year following an incident nine months earlier in which he was knocked off his bicycle by a car.

Mr Crawcour’s colleagues wanted to pay tribute to him and collected £500 to pay for the kissing gate on footpath 10 across Vines Farm, which was one of his favourite walking routes.

It is located at the start of the path just south of the New Inn pub in Chalkhouse Green Road.

The gate, which replaces a stile, was installed in May while the memorial plaque was added last month at a ceremony attended by members of Mr Crawcour’s family, the society’s chief officer Tom Beeston and about 12 of the volunteers.

Steve Feigen, a member of the group, said he and his fellow volunteers wanted to honour Mr Crawcour as he was a “lovely, quiet and unassuming bloke”.

“We were the people he socialised with the most,” he said.

“It seemed the best way we could remember him was to sponsor a gate so his colleagues put together the money for the gate and the plaque and we then invited his family to come and unveil it.

“We wanted to install it somewhere where he regularly walked and where a stile needed replacing. A friend of Charles said the footpath was one of the ways he walked.

“It was a very nice day and his relatives were very appreciative.

“When we went to his funeral they were so pleased that so many people showed up. There were about 20 of us from the society.”

Mr Crawcour, who had been a member of the society since 2005, was a stalwart of the path maintenance group.

Mr Feigen said: “He was in charge of a team of people who put in gates and he also managed the working parties, which took place four times a month.

“He was a mathematician and had worked in IT and he came up with the idea for templates for the way the gates should be installed. This made it easier for us.”

Mr Crawcour, who lived in Reading, left £35,000 to the society, which his family requested should go to the maintenance team.

The group decided to put most of the money towards a new towing vehicle and trailer and the remaining £10,000 towards other society projects.

Previously, the volunteers have had to use their own 4x4s but these were sometimes unable to reach sites to deliver tools.

The new trailer has enabled much better access to sites, including some “difficult” ones in Swyncombe and Emmington, near Chinnor.

Liz McGivan, Mr Crawcour’s niece, said: “One thing that is great about leaving a bequest to a smaller charity like the Chiltern Society is that you can really see the difference it makes. We were clear as a family that it was Charles’s wish that his bequest be used to support the South Chilterns path maintenance volunteers and their work, which meant so much to him.

“He was an active participant in the group, made friends there and gained an enormous amount of satisfaction from what they do in terms of improving access on the rights of way, not to mention the camaraderie of the teams.

“It is fantastic to see Charles’s gift being put to use in such an appropriate and practical way.

“It is a wonderful way of continuing Charles’s link with the group and we hope that this dedicated vehicle will make a huge difference.”

Mr Beeston thanked her on behalf of the society and said that bequests like this were important to the society in order to look after the Chilterns Area of Outstanding Natural Beauty.

He said: “Charles and similar volunteers are critical to us. The South Chilterns path maintenance volunteers group — one of three such groups — has been able to clear more than 100,000m of paths and install more than 300 gates in more than a decade of its existence through the efforts of members like Charles.”

After the plaque unveiling, the party went to the New Inn to drink to Mr Crawcour’s memory.

The Chiltern Society is a charity with more than 500 volunteers who work to maintain and improve the Chilterns. For more information, call 01494 771250 or visit www.chilternsociety.org.uk