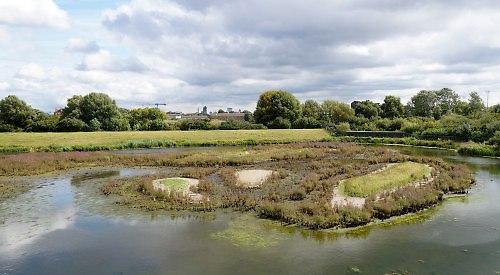 PLANS for 200 new homes on farmland have been condemned by residents and three parish councils.

The objectors say the proposed site at Bridge Farm on the outskirts of Twyford is unsuitable due to the risk of flooding and because it would put more strain on local health services and schools.

The land is not in the green belt and was earmarked as potentially suitable for development in the council’s local plan update, which was published in January last year.

Croudace Homes says it would provide “market and affordable housing” on the 29-acre site, which is bordered by the Henley branch line to the east, the A4 New Bath Road to the north and the River Loddon and more fields to the west.

To the south is the Bridge Park retirement homes development currently under construction.

This will have 200 homes as well as a care home at the former Bridge House and was granted planning permission in March last year.

The Croudace scheme, which would require a new main access from New Bath Road, would have 477 parking spaces, 172 of which would be unallocated, public open space and a play area.

Residents are worried about the scale of the development and the effect it would have on the Piggott School in Wargrave, which is a two-minute drive from the site and already oversubscribed. There are also concerns about building on a flood plain and more congestion on New Bath Road.

Laura Bennett, of Beggars Hill Road, Charvil, said: “Current amenities and services are already stretched. It is extremely difficult for existing residents to get a doctor’s appointment. Schools are oversubscribed and this year saw record numbers of children not getting places at the Piggott School.

“This land is a flood plain, which does flood each year and is a necessity for the rainfall and broken river banks. Without this, where is the water expected to be syphoned off to? There is a valid concern that we would see severe flooding.”

Charlotte Green, of Foxes Walk, Charvil, said: “We are already struggling with traffic along the A4 in rush hour as well as a lack of essential amenities.

“There are not enough secondary school places locally for the families already here and trying to get a GP is near impossible due to the sheer volume of patients on their books. Until these are addressed, I think it is not appropriate to add to the problem.

“This does not include my concerns regarding the local green belt land and the effect of flooding.”

David Chappell, of Gingells Farm Road, Charvil, said that doctor’s appointments were “like gold dust” as it was. He added: “There appears to be a lack of consideration for how the locality would be able to support such an influx of people.”

Karen Murphy, of Chiltern Drive, Charvil, said: “Making New Bath Road even heavier with traffic would increase the risk of accidents with schoolchildren going to and from the secondary school.

“The infrastructure is already struggling to cope. You can never reach the local surgery as they’re too busy. The secondary school is oversubscribed.”

Charvil Parish Council has objected to the application on the grounds that the scheme would increase both congestion and the risk of flooding.

It said: “To allow this development would set a dangerous precedent for all other sites included in the first draft [of the local plan] and would not allow the holistic approach that the plan is designed to bring.

“Fortunately, the water meadows have largely managed to prevent homes being flooded. This development may well be the tipping point despite the flood mitigation measures suggested and this risk is too great for Charvil householders.

“The A4 is already extremely slow-moving on a school day. Frequent accidents bring the whole area to a standstill.

“A further major junction so close to the existing Wargrave Road roundabout would increase the likelihood of accidents and delays on a road already close to capacity.”

Parish councillor Pat Sutlieff said: “I am very concerned about the flood risk. Many parts of Charvil are already subject to flooding and this development would increase the volume of water flowing into the area, producing additional risk to Charvil properties at the edge of the current flood risk zone.”

Wargrave Parish Council has also objected, saying that the proposed access would be “detrimental to highway safety and liable to cause considerable problems”.

It also said it was concerned about the impact the development would have on schools and healthcare facilities.

Twyford Parish Council described the application as “premature” and said it would deny residents the “democratic right” to decide if they wanted the site to be included in the next local plan.

It added: “It takes no account of the impact any extension of the village envelope would have on local services and infrastructure.”

Croudance Homes held a public consultation on the plans in June and held pre-application talks with planning officers as well as Derren Gray, headteacher of the Piggott School.

The draft local plan made provision for 15,000 homes at Grazeley and about 850 homes every year until 2036 to help meet government targets. However, the Grazeley development is now unlikely to happen due to its proximity to the Atomic Weapons Establishment in Burghfield.

These would include an estimated £4.8 million the developer would have to pay under the community infrastructure levy.

A planning statement, submitted by consultants Boyer, says: “The proposed development will have some temporary landscape and visual impacts.

“However, the effect of the development on the character and visual appearance of the wider countryside will not be significant.

“The land is not subject to any statutory and national landscape designations and public views into the site are very limited.

The statement also says that “no major capacity constraints have been identified in respect of education or medical service provision”. There is currently access to the land from the New Bath Road and Wargrave Road via a bridge over the railway line.

However, the bridge is not capable of serving the development and a new roundabout is proposed for the A4.

The developer’s website says: “Bridge Farm provides excellent pedestrian connections to the centre of Twyford. There is an opportunity to form new vehicular access points on the A4 to direct traffic away from the centre of the village, while allowing for direct pedestrian access to Wargrave Road, over the railway bridge. The new homes will be designed to be low carbon and the scheme will set aside significant areas for biodiversity enhancement, together with a riverside park.

“Being located next to the River Loddon, part of the wider site is susceptible to flooding and is not suitable for development.

“However, this constraint does present an opportunity to provide large areas of land for biodiversity enhancements and parkland as part of a holistic scheme.”