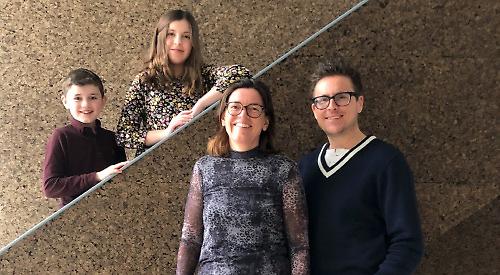 THE redevelopment of a cottage in Harpsden has won a design award.

The five-bedroom property has been named best modern building in this year’s Chilterns Design Awards, which celebrate projects which enhance the character and beauty of the area.

The Gummers’ project, which was designed by Guttfield Architecture, of Twyford, retained a Victorian farm worker’s cottage but involved demolishing and replacing two adjoining buildings.

The original two-storey cottage was built in about 1903 together with a stable block and coach house. While the cottage remained largely unaltered, the other two buildings had been extensively altered during the Sixties and Nineties.

The Gummers, who have three children, bought the property in January 2017 and soon realised extensive work was needed to bring it up to modern standards.

Mrs Gummer, a marketing consultant, said: “When we first moved in it was very cold. The heating did work but it was an old and leaky house.

“I remember hiding out in the one room we could get warm and running to the kitchen to get something and then running back.

“There were also two staircases, one at either end of the house, which the kids loved because they could run up one and down the other to keep warm.

“On the outside it might have looked like one house but inside it had a very strange layout. To get from one side of the building to the other you had to walk through a bedroom.

“We were a bit naive when we moved in as we thought we could just put in some new windows and paint it but when we started thinking about how we could make the space work it became too difficult.

“We decided to keep the original cottage because there was nothing wrong with it. It was built in 1903 and is very solid while the other buildings were not built so well.”

The couple had completed extensions and renovations of their previous homes but realised they needed the help of an architect this time.

Their brief was to create a large, low-energy home with a modest budget and options ranged from extending to demolishing all the existing buildings.

The architect discovered that the old stables and coach house were unsuitable for further adaptation and it would be too wasteful to demolish the cottage.

The Gummers decided instead to create two separate but connected buildings to sit alongside the original one, restoring the historic three-part composition.

The couple chose Fred Guttfield as their architect because they liked the way he paid attention to detail.

Mrs Gummer said: “The whole project took a huge amount of planning and preparation before we put a spade in the ground and Fred managed the whole process.

“We felt that having the right architect was very important because otherwise we would have been totally out of our depth.

“We would come up with some crazy ideas and he would say either that they were terrible or he would look into it and incorporate it if he could.

“One thing we wanted was a cork wall and he built it in around the stairs. We wanted it because cork is a sustainable material and is very good at absorbing sound, which is quite important with open plan living. It also looks cool.

“Our brief was actually too wide. We spent a bit of time narrowing it down. We had to throw out a lot but one of the main things we had was a beautiful setting. We have the garden and we are close to Henley golf course but we couldn’t see any of it and had to bend down to see out of any of the windows.

“We wanted to make the most of the views so we have put in a lot of glass, which we have triple-glazed.”

The Gummers needed enough room for their children, Posy, 18, and Eliza, 12, who go to Cranford House School in Moulsford, and Archie, 10, who attends Moulsford Prep School.

The redevelopment created a fifth bedroom as well as two additional en-suite bathrooms. The ground floor of the cottage has a snug and living room, which links to a library and living space in the new extension. These lead to an open-plan kitchen-diner with a round plywood dining table and curved banquette.

The cork-clad staircase is designed to appear as if it has been pulled out of the central wall and provides access to the first-floor bedrooms and master suite.

Mrs Gummer said: “We wanted to make the spaces as dual purpose as possible because our children range from 10 to 18 and there is quite a bit of difference in terms of what an 18-year-old and a 10-year-old want.

“The other important room was the kitchen because I wanted to have all the family sitting round the table having meals, so we have a big circular table.”

Sustainability was also a key consideration so the house is largely made from timber with foundations made from recycled cement mix. A ground-source heat pump provides all the heating and hot water for the house and there is a solar-panel system too.

Mrs Gummer said: “What we wanted to do was make it sustainable and future-proof it as far as possible. When the Government said it was going to stop gas boilers being fitted in new houses from 2025 we wanted to put in a ground-source heat pump because we were always thinking long-term.

“The original cottage wasn’t well insulated so we put in a frame on the inside to provide an extra layer of insulation rather than knocking it down and starting again.

“There is nothing wrong with it so it was better to insulate that and replace the other bits, which didn’t have a good structure. They weren’t rescuable so that all came down, which meant we could put in all the right insulation.”

Outside, the lower storey of the new buildings is finished with light grey cement board cladding to complement the roughcast render of the original cottage.

At ground floor level, selected panels of the elevation are picked out in locally quarried knapped flint. The dentil detailing from the cottage has been referenced on the upper storey of the new parts with vertical strips of larch.

On the south side of the building, two balconies have been added to take in the views of the surrounding countryside.

Mrs Gummer said: “The way the house was built is steel and timber so we needed something to clad the exterior. We felt the wood would give it a softer look.

“It was about finding materials which were in keeping with the area and had that modern feel that we liked.”

The family moved out in January 2019 and rented a property in Henley while the work was carried out.

Mrs Gummer said: “It was quite difficult to keep us away during the build. We were there at least weekly, although there were fast and slow phases. It was very exciting to see our dream home take shape.”

The family moved back in two weeks before the first coronavirus lockdown in March last year and the project stayed on budget, which worked out at about £760,000.

Mrs Gummer said: “We were so excited to be able to move in and couldn’t be happier with the end result. My favourite part of the house is the kitchen table — we have had 14 people round it on Christmas Day and that was just so much fun.

“We have created something rather special and we all played our part in making it a reality.”