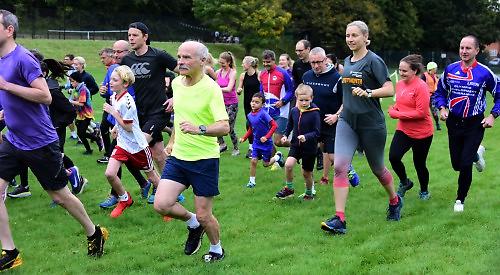 MEMBERS of a Henley running group celebrated their 150th event at the weekend.

Organisers of the Henley parkrun meet at the playing fields off Tilebarn Close every Saturday at 9am for a 5km distance.

The 150th run attracted 69 people and the first one home was Peter Wooldridge, from Wimbledon, who finished in 18 minutes and 44 seconds.

The route is entirely on trail paths and takes the runners from the fields next to Henley Tennis Club to the edge of 40 Acre Field.

They then follow a short section of the Pack and Prime Lane bridleway before coming back to the field where they started.

Prior to setting off on Sunday, the runners were thanked by run director Phil Stubbington for showing support and helping the group to reach its milestone.

Mr Stubbington, who lives in Adwell Square, said his wife Louisa Mead got him interested in parkrun several years ago. He said: “It’s certainly a great way to improve your health and fitness.

“Our run is a very picturesque route and it’s particularly good if you’re stressed. There’s also coffee and cake afterwards.

“Before covid, we were averaging about 66 people but now the numbers have settled in the early forties. Our main problem is finding volunteers to help out. Although the number of runners has dropped, there is always a need for marshals. We get a few runners that come with their children but if they are under 11 they have to run together.”

The Henley group’s first run was in July 2017 and came after runner James Barr received support from the town council.

The run is free to take part in and newcomers are advised to arrive half an hour early for a briefing.