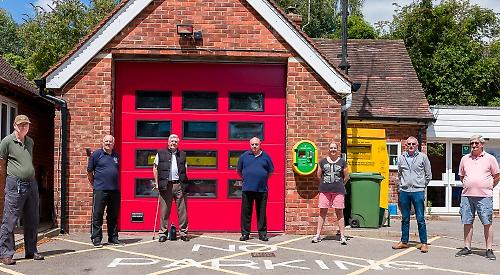 THE old fire station in Wargrave has been sold to the owners of a nearby retirement homes complex.

Wargrave Housing Association expects to complete the purchase of the building in Victoria Road from the Royal Berkshire Fire Authority in the next few weeks.

The management committee will then discuss possible future uses, including creating more homes in addition to its 46 flats at Elizabeth Court in the same road.

The association already owns the village GPs’ surgery, which is also in Victoria Road and is leased to the NHS.

The fire authority decided to close the fire station in July last year as part of a cost-cutting exercise designed to make up for a budget shortfall of £284,000.

A key reason for the decision was the crew had failed to achieve a response target of 60 per cent because it was under strength.

Andy Ferguson, chairman of the association, said: “With this purchase, we have several options, including offering to extend the doctors’ surgery to provide additional much-needed space or to build additional affordable housing.

“Our desire is to make Elizabeth Court a great place to live.

“There are options and we need to talk to interested parties.

“Personally, my preferred option would be to somehow provide more space for the surgery. Getting that agreed — with the way the NHS works — would be very difficult.”

The association was first approached to take over the fire station about a year ago after the fire authority approached Wargrave Parish Council.

The council also alerted the surgery but the doctors didn’t think it would meet its long-term clinical or administrative needs, according to the Berkshire West Clinical Commissioning Group.

However, since the closure, the fire station has been used to help the surgery administer coronavirus
vaccinations.

The association said it was “extremely serious” about exploring potential uses for the building.

Mr Ferguson, who succeeded Stan Thompson as chairman six months ago, said: “This purchase has only been possible through the wise stewardship of the management committee and Stan.

“He felt passionately, as I did, that we wanted to have it as part of our estate.

“Having inherited that thought from him, I have been able to build on it and it has come to fruition. Now that we have secured it, whatever happens will be positive from a community perspective. We are a charity and the management committee doesn’t take any money so it is a self-funded process. We all live in Wargrave, so we have the village at our best interest. That is of paramount importance to us.

“We want to continue to maintain these satisfaction levels and take action on things that the tenants would like to see improved.”

News of the sale was welcomed by Chez Annetts, who campaigned against the closure of the fire station. Her father Tony was a firefighter for 43 years and he was in charge of the station for 36 years before he retired in 2012.

Ms Annetts, of Kings Acre, Wargrave, said: “I think it is absolutely brilliant. With all of the options and the concerns that it could have just gone to a housing developer, the fact that it has gone to Elizabeth Court is a good outcome.

“They do so much good for the village, particularly the elderly, so if they are extending that’s fantastic.

“Not a lot of people are aware of the restrictions on the property. I think it has to stay at one level, so there were a lot of restrictions and it would have been difficult for just anyone to take it over.

“I would like it to be a community area. I wouldn’t want it to just be used for parking but I appreciate it is difficult with the site being set back from the road.

“I know Elizabeth Court already has a lovely lounge, but it would be nice to have somewhere for family members to visit.”

Before it closed, the fire station was the oldest and smallest in Berkshire, having opened in 1903.

The fire authority first talked about closing it four years ago but the station was given several reprieves following a campaign to save it by residents and the parish council.

It was first recommended for closure in April 2017, but the decision was delayed by 12 months in order to give the fire crew time to improve their availability.

The decision was delayed for another nine months in October 2018 and again in December 2019 for a period of six months as the general election was about to take place.

The decision to finally close the station came after the crew failed to achieve the availability target and the majority of incidents in Wargrave were dealt with by crews from elsewhere.

A spokesman for the fire authority confirmed the sale was subject to contract.

He added: “Residents of Wargrave and neighbouring areas can be reassured that they continue to receive the same high level of service from nearby stations.”