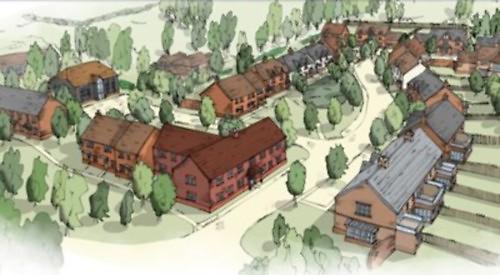 PLANS for more new homes near Shiplake have increased fears about pollution and increased flood risk.

Concerns have been raised after Beechcroft Developments revealed details of the scheme for 40 houses and some commercial buildings at the site of the former Wyevale garden centre, off the A4155 Reading Road.

Planning permission was granted in 2017 but the developer has now revealed details of the scheme, including appearance, layout and scale.

Residents and local councillors have called for a halt as the site is next to Thames Farm, where Taylor Wimpey is planning to build 95 homes but withdrew plans to drain surface water from the development into the River Thames after South Oxfordshire District Council, the planning authority, said they were “unacceptable”.

Beechcroft bought the land from Fawley Court owner Aida Dellal in April, more than 10 years after the garden centre closed and the site became derelict and the old greenhouses attracted vandals. The company plans to include 16 affordable houses in its development as well as 250 sq m of commercial space, parking, wildflower grassland and a play area.

It says: “The proposed works will make significant improvements to the character and appearance of the site as a whole, with the demolition of the unsympathetic existing buildings and the removal of the risk of antisocial behaviour.

“The proposed development has been sensitively designed with due consideration to the local vernacular to produce a development that sits harmoniously within the wider context of Lower Shiplake.”

Beechcroft managing director Chris Thompson said: “We have a good mix of houses for this site, which will also provide affordable housing, and we want to develop it in a style that is familiar to Shiplake.

“It shouldn’t be a controversial application and we want to get the approval and start building the development in a reasonable time frame.”

Councillor David Bartholomew, who represents Shiplake on the district council, said: “I welcome the fact the developer has abandoned plans to inappropriately
over-develop the site. I hope there will not be later attempts to increase the housing numbers here.

“However, there are major issues to be addressed. Dissolution features on the adjacent site at Thames Farm have resulted in complex drainage challenges which may impact the subsequent design and layout of that site.”

The land at Thames Farm was found to be unsafe and vulnerable to sink holes so Taylor Wimpey planned to inject it with concrete.

This would have made the ground impermeable to water which meant a drainage solution was needed.

The company’s latest drainage plan was rejected by the district councilbecause it would have meant running the water down a small waterway near Jubilee Park, which could have increased the flooding risk.

The Henley Society, a conservation group, has also raised concerns.

It said: “The site is close to a water pumping station and the possible contamination of drinking water should be taken into account. The nearby Thames Farm site has major problems with the disposal of heavy rainfall. Has this site been checked for similar problems? Whatever measures are taken at Thames Farm are likely to have an impact here.

“Only one commercial building has been proposed and this has inadequate parking space. It is important that house sizes are not allowed to be increased by future amendments to the plans.”

Peter Boros, who lives in Reading Road and led the opposition to Taylor Wimpey’s proposed drainage scheme, said: “I consider this application to be premature and not capable of safe full and final determination until a comprehensive intrusive geotechnical examination and assessment of the site is undertaken.”

Stephen Seabury, of Lowes Close, Shiplake, said: “I can see no reference in the documentation that explicitly addresses drainage from the site, clean or waste water.

“Given the challenges at the adjacent Thames Farm site, I believe it is incumbent on the district council to get this bottomed out and ensure that Thames Water, the Environment Agency and the relevant agencies are content with the plans before moving forward.”

Sara Browett, of Woodlands Road, Harpsden, said: “I wish to object to this planning due to ongoing major issues with Thames Farm and their application and the effect on the drainage, flooding and environment for all the sites. I don’t believe this site is acceptable for more houses and feel the infrastructure of the surrounding villages will not cope.”

Shiplake Parish Council said the site was likely to have fundamental issues with drainage similar to Thames Farm and could potentially damage the water supply.

It said: “This may require a comprehensive geotechnical assessment to be undertaken prior to authorisation of the development proceeding.

“Officers should also be satisfied that conditions be included that are sufficiently strong to preserve both the landscape and character features to prevent a future change in the housing mix.”

The council also raised concerns for the lack of tree planting to screen the development from Reading Road given the nature of the rural setting and said that the size of the commercial space proposed “disappointing”.

Councillor Laurence Plant said: “I’ve got no objection to the plans but the problem will be whether the drainage will be sufficient.”

Councillor Stefan Gawrysiak said: “The designs in this application are acceptable and the drainage will come at a later date.”

Since the first plans to develop the site were unveiled in 2018, residents have been concerned about the size of the development, the extra pressure on services and additional traffic.

The initial plans were opposed by Harpsden and Shiplake parish councils, the Campaign to Protect Rural England, the Henley Society and the Chiltern Society while Henley Town Council supported the application, subject to conditions.

The public consultation period ends next Friday and the district council is due to make a decision by January 11.