Fake daffodils that give film the feel of a Twenties spring 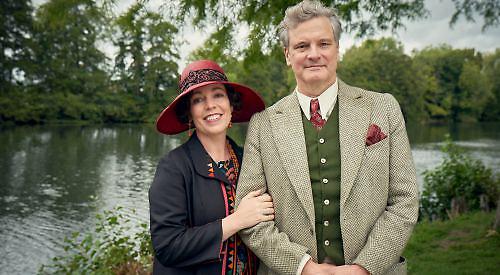 Mothering Sunday is based on Graham Swift’s novella of the same name and is set in 1924.

It follows housemaid and foundling Jane Fairchild (Odessa Young), who finds herself alone on Mother’s Day.

Her employers, Mr and Mrs Niven (Firth and Colman), are out so she has a rare chance to spend an afternoon with her secret lover, Paul (Josh O’Connor).

Paul is the boy from the manor house nearby and is Jane’s long-term love despite the fact that he’s engaged to be married to another woman, a childhood friend and daughter of his parents’ friends.

Then a series of events change the course of Jane’s life forever.

A house in St Mark’s Road, Henley, was used as the setting for her house and the scenes were shot in November last year.

Hambleden was the location for the book’s Titherton because of its small collection of red-brick and stone houses, with sagging slate roofs and gardens tumbling with roses.

Amy Young, of film distributor Lionsgate UK, said: “When Mothering Sunday took over the village crossroads that day, the war memorial was stacked high with flowers to reflect the scene’s 1924 setting, the loss of a generation still fresh in the residents’ minds. Production designer Helen Scott and her crew rushed to plant spring flowers around the scene to camouflage the fact that filming was happening in October, with daffodils scattered through the churchyard of St Mary’s and wildflowers along the walls.

“As filming continued by the church, traffic passed by along the village’s main road and some curious hikers paused to see what was going on before continuing into the hills above the town.

“Shooting stopped at one point to allow the postman to do his rounds, delivering a van full of pandemic care packages and online shopping.”

Angus Armstrong, who is vice-chairman of Hambleden Parish Council, said: “Nothing was planted in the ground — they used fake daffodils, usually on wires, stuck in the grass.

“They can just set it all up almost as they start filming. The expensive bit for them is being on set so it is all planned in detail beforehand.”

Filming happens in Hambleden so regularly that the parish council runs a “film fund” to which movie-makers are asked to contribute.

This money is then given out to good causes across the parish. As of September, the fund has more than £5,900.