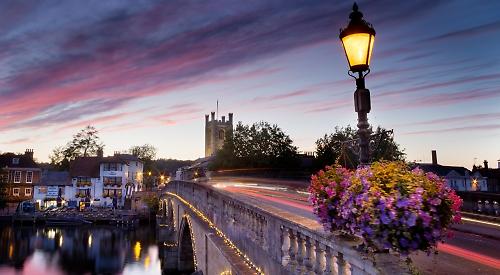 A PHOTOGRAPHER from Henley has been honoured in a national competition.

Robin Dodd, 55, won the “your view” category in the Landscape Photography of the Year contest.

His image, Runner at Dawn, was taken by the River Thames in Henley at 8.30am on February 28 as the mist was being burnt away by the sun.

It is a combination of two shots, taken a few seconds apart, while the light was still the same. The category rules permitted digital manipulation.

The image, which was one of thousands entered for the competition, has also made it into the Landscape Photographer of the Year book.

There will also be an exhibition at London Bridge station from Monday to January 9, which will be followed by a nationwide tour.

Mr Dodd, who lives off Deanfield Avenue, works in the emergency services and his shift work means he starts or finishes in the early hours of the morning.

He says that is the best time for taking photographs as you can make the most of the light.

Mr Dodd said: “I do a lot of shift work and I have been travelling in and out of Henley throughout the last 16 years at a time when other people don’t see it. I might come back at 1am or 2am and do some astrophotography or I might do it at 4am or 5am before the sunrise comes in.

“Just because it is at night doesn’t mean that it is the end of the show. You just have to look at the weather to see whether there are clear skies or whether the moon will be out.

“The best time of the day for photography is early morning before the sun comes up. When the light comes in, it comes at a low angle below the horizon and bounces off the clouds. The same happens at sunset.

“The quality of the light is far better — it creates gentle shadows on trees and other aspects of the landscape.

“During the day the light is so harsh and has a very high contrast. Landscape photographers will generally pack up by 10.30am.

“For the Runner at Dawn I went down to the river just before sunrise, which was a lie-in for me, and put a tripod down. When the sun came up it shone through the mist and I started snapping away.

“There was movement down the river where people were walking past, rowers, dog walkers and some boats, so I created a bit of a time lapse.

“The jogger ran past and then 30 seconds later the birds flew past and I blended the two together. Composition is crucial to any picture. You can have too much going on and that confuses the viewer but then sometimes you can have too little going on.

“I just really liked this image. Over the years I have had a few that have been shortlisted but this year I came up with a winner.”

Mr Dodd is married to Louise, a surveyor, and has two children, Emma, 21, who studies political economy at Leeds University, and Sophie, 16, who is at Sir William Borlase’s Grammar School in Marlow.

He says his favourite place to take pictures is by the river and, in particular, the “photogenic” Temple Island.

One image, Moon sets at The Temple, was taken on a cold and frosty morning during the coronavirus lockdown last year. It shows the sun rising from the left and moon setting on the right. Mr Dodd said: “I go down to Temple Island quite a bit at night-time. For Moon sets at The Temple, I took my tripod and I had the camera on a 25-second exposure. You have to be careful because if you have it too long, the image is not pin-sharp.

“One of the interesting things down at Temple Island is it is quite a dark area compared with other parts around it, although there has been a bit of an increase in light pollution, which I think is coming from the Hambleden Lock direction.”

Another image, of Henley Bridge, was taken in September, and features the lights unlawfully installed by artist Clive Hemsley.

Mr Dodd said: “I didn’t like the lights because they added to the light pollution but they did work in that photograph.

“I go down to these locations time and again but they don’t always work. The Henley Bridge picture was taken on the third visit. The lighting from the sky was brilliant that night and the lights on the road came from the tail lights from the cars.”

Mr Dodd goes out to take photographs most mornings, depending on the weather, and also loves taking pictures of woodland.

He first got into photography when he was about 14 and enjoyed using the dark room at school. He kept it up socially as he grew up living around Europe because his father was an infantryman in the army.

Mr Dodd said: “At school we had a twin reflex camera with 120mm film, which was quite old, but I had my own Olympus camera, like a lot of people who were interested in taking photographs in those days.

“When I was at university I would do all sorts of things and take pictures to help the student union with its magazine but that involved mainly taking pictures of students. I really wasn’t much into landscapes to begin with.

“During the holidays I would go back home and when I was 18 or 19 we were living in Berlin during the Cold War period. The wall was still up in those days and there was graffiti and murals and people would protest all the time. It was quite an interesting time.

“There I got into doing more photography, particularly at night. In Berlin there is the Glienicke Bridge, which was used in the film Bridge of Spies.

“I used to go there from time to time and occasionally they would close the bridge because it was the days when they were still swapping spies.

“Once I got quite a good picture late at night and that was one of the things that got me interested in landscape photography.

“Since moving to Henley about 15 years ago it has become my passion and a big hobby.”

Mr Dodd uses a full-frame Canon camera and lenses, a tripod and a small drone.

He is a member of Marlow Camera Club, which he says has helped him to improve his pictures as it holds lots of competitions. He has exhibited at the Henley Arts Trail.

Mr Dodd will be displaying Runner at Dawn and other local images at the Shiplake College Christmas fair tomorrow (Saturday) and at the Old Fire Station Gallery in Henley with the Henley Arts and Crafts Guild from November 19 to 23.

He has also donated a limited edition image of Temple Island at Night to the Nomad youth and community project in Henley, which was to be auctioned off at Relais Henley Red Lion Hotel yesterday (Thursday). 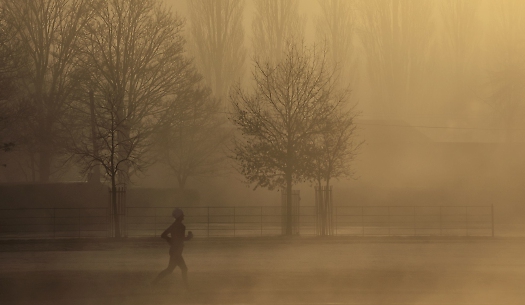