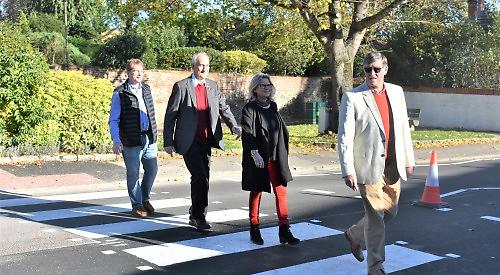 A NEW pedestrian crossing has been installed in Henley.

The zebra crossing, which cost £35,000, is in Gravel Hill, almost 20m east of the junction with Hop Gardens.

It is designed to make it safer for pupils and parents to walk to and from Badgemore Primary School in Hop Gardens.

The crossing was paid for by Henley Town Council and Oxfordshire County Council, the highways authority, following a public consultation earlier this year in which 110 people were in favour and just seven were against.

Stefan Gawrysiak, a town councillor and Henley’s representative on the county council, said: “I’m extremely pleased to see the crossing finally in place.

“This is a very important location for this is a road into Henley and close to some of our schools.” He said it was the second of three crossings that the town council’s ruling Henley Residents Group had promised at the last election.

The next one will be a puffin crossing in Marlow Road about 25m south of the entrance to the Swiss Farm camping and caravan park. This is currently being costed.

Last summer a £37,000 crossing was installed near the “pram walk” in Greys Road following a 10-year campaign by the community and local schools.

Henley Mayor Sarah Miller, who was one of three town councillors to join Councillor Gawrysiak at the official unveiling of the new crossing, said: “I’m delighted to see that it is finally ready. Once again, Stefan has delivered what he promised and we now have two crossings that will help children in our local schools to cross safely.”