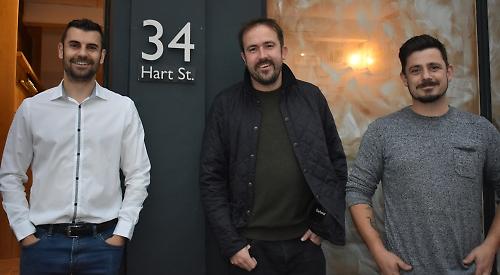 THREE friends are to open a craft beer and gin bar in Henley.

James Cummings and brothers David and Jamie Adams, from Thame, decided to launch Stable 34 in Hart Street after the success of their mobile drinks business, Ale Van Events Bar.

They chose Henley for their permanent venue because they felt the town was “vibrant”.

Stable 34, which will be in the former Cherwell Windows premises, will offer 15 cask ales, craft beers and ciders on tap as well as “rustic” cocktails and more than 40 different gins.

The men, who have all worked in events, also hope to offer food, including Vietnamese and Japanese street food, occasionally.

Mr Cummings, 36, said: “We converted an Eighties VW horsebox into a mobile bar which proved popular at festivals and then we started picking up weddings. We then started providing all the bar stuff for a wedding venue in Olney so we’ve been really busy apart from during lockdown.

“We thought we could do more so in lockdown we started looking for something that could fit the bill.

“We wanted to do it in Oxfordshire and we saw Henley had a place to rent and it’s a vibrant town with a brewery background and we’re beer enthusiasts so it seemed to fit.”

The men, who are old school friends, had the idea for the mobile van in 2016 after visiting the Oktoberfest beer festival in Munich. Mr Cummings said: “We started it as a hobby. We wanted to do a couple of festivals and then call it a day but it took off and then David and I quit our day jobs to do this full-time.”

He said Stable 34 would open once the interior work at the Grade II listed building has been done.

“It’s not going to be the biggest bar in the world but it’s more about the range we’re offering,” he said.

“We’ll be showcasing beers from the likes of Mad Squirrel and the Chiltern Brewery and we will also have a whole load of craft beers from breweries near Edinburgh which people won’t have had before as they are quite new.

“Gin-wise, we’ll have about 40 so there’s something for everyone.”

The men have named their tap room after the first venue they operated from when they started the business, a stable numbered 34, which also happens to be the number of the premises in Hart Street.

Town councillors objected to the planning application for Stable 34, saying there was no need for more restaurants and the town should focus on attracting more retail outlets.