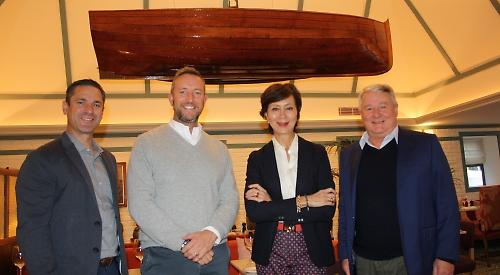 A WOODEN dinghy built in 1895 has been suspended from the ceiling of the restaurant at the Relais Henley.

The boat is on loan from the private collection of Hobbs of Henley, which once owned the hotel when it was the Red Lion.

The dinghy was made by Shepherds of Henley, a family of boat builders who sold the old hotel to the Hobbs family along with all their other premises in 1917.

Hobbs continued to build dinghies, punts, skiffs and motor launches until the Eighties.

Grace Leo and Tim Hartnoll, who bought the old Red Lion and tranformed it into the Relais, met with Hobbs of Henley managing director Jonathan Hobbs and Mark Mosimann, a hospitality specialist who helped create the Clipper restaurant, to mark the installation. A gold plaque explains the history of the boat.

Ms Leo visited the Hobbs’ boatyard in Goring and chose the dinghy because of its historical links to the hotel. She said: “There were a lot of beautiful boats but this one had a lovely connection. I thought it might be a bit small but it fits into the space really well. It’s not overbearing.”

It took about six weeks to restore the boat before it was installed.

Mr Hobbs said: “She looks like she belongs here now.”

He said the success of the hotel was good for his trade and the river.