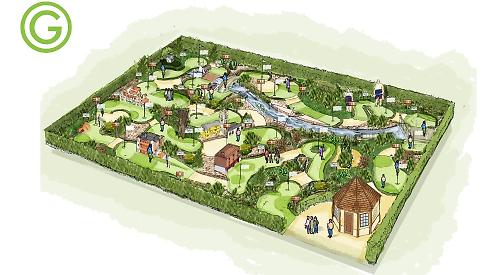 A £250,000 adventure golf course being built in Henley should not be paid for only by the town council, says a councillor.

Work has begun on the new facility, which will replace the old putting green in Mill Meadows.

Will Hamilton, a member of the Conservative opposition on the council, said that other sources of funding should have been sought.

Speaking at a council meeting, he said: “It’s great it’s going ahead — I’ve always wanted something to go there that’s better than what was there.

“But picking up the whole bill of £250,000 shouldn’t have been done. We could have got a grant. The district council wanted to fund cash-generating projects.

“I raise this now because I’ve emailed the town clerk with some other ideas for funding because we should now be talking about sponsoring a hole.

The golf course is predicted to make £50,000 a year profit for the council.

Councillor Stefan Gawrysiak, a member of the ruling Henley Residents Group, said that South Oxfordshire District Council only considered grants twice a year and it wasn’t appropriate to delay the project only to receive a grant that was the equivalent of the income lost by delaying the project.

He said that in any case the district was unlikely to have agreed to a grant as the facility would be earning money for the town council.

Cllr Gawrysiak said there was still time to ask businesses if they wanted to sponsor a hole. He added that Cllr Hamilton had only raised his concerns for the first time at the council’s finance strategy and management committee the previous week. Cllr Hamilton shook his head.

Cllr Gawrysiak said: “He has never been to a putting green meeting, an adventure golf meeting at all, never turned up, never made any suggestions.

“The town clerk has put together a robust business case based on adventure golf outfits around the country. I hope when it’s complete that income generation will be great for the town.”

Councillor Ian Reissmann (HRG) said the council had “plenty of money” to spend on projects of this sort.

“We would be wasting our time if we were to follow this very belated objection,” he added.