We’ll plough everything into pub 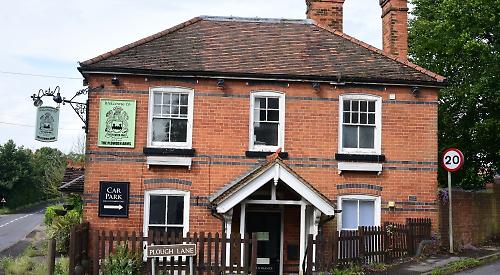 TWO chefs who bought a pub in Shiplake plan to bring it back to its former glory.

Liam and Ryan Simpson-
Trotman, who own Orwells in Shiplake Row, acquired the former Plowden Arms on the A4155 Reading Road at Shiplake Cross earlier this year.

They held a presentation on Monday evening at Shiplake Memorial Hall, where about 170 residents turned up to hear about the pair’s plans for the pub and to ask questions.

Drinks and light refreshments, including Scotch eggs and sausage rolls, were on offer at the start of the event.

The chefs intend to re-open the pub in the spring under its original name, the Plough, and to serve traditional pub food seven days a week.

They will keep the original features but create a new pub garden and change the location of the car park.

The pub, which dates back to the 17th century, has been closed since previous owner Karen Rackham left in January 2019.

The Simpson-Trotmans, who have been married for four years, had been considering buying it for several years and made an offer when they realised there was a risk of it being lost forever.

Liam, 36, said: “Owning a pub has always been my dream. We wanted to buy it for a long time but never had the tenacity to actually do so.

“But we received a lot of support from Shiplake residents during covid and the idea finally developed into something. There’s nothing better than having a community that supports you like that and we want to create something we can enjoy together.

“History is important for us and we want to do the best for the property and bring it back to its former glory.

“This pub has survived the test of time, which I think is amazing.

“In 2019, we must have been the last patrons of the pub before it closed — we needed a good pint and we went there.

“Now we want to create a new chapter for it and want it to be the place where people come to
celebrate.

“We don’t want to give too much away, but we are really excited about the plans.

“We want to be open seven days a week but hospitality is really hard and we can’t always get the staff to stay open every day so if that won’t be possible, we will start with five days a week.”

Ryan, 38, said: “We want a pub that has lots going on all the time and, as chefs, we love cooking all the fancy food we do at Orwells but we also like to eat Scotch eggs and sausage rolls.

“It’s not going to be another Orwells because we want it to have its own character but it’s going to be well known for its ales — we want at least four — as well as lagers and we want to keep it as local as possible.

“It will move with the times so that it can survive the test of time and stay current.

“We are going to bring it back to life and will make it work for the community and for us as chefs.

“Fish and chips will definitely be on the menu, which will be seasonal. We want the pub to be a place where people can have a bit of everything. We have done our best to work with a building that is very old and we also want to make it as accessible as possible.”

They want to create a rear kitchen entrance and replace a temporary building with a permanent external storage unit.

They have also submitted plans for the new garden and a new car park entrance.

A former coal store would be removed to allow for a clear walkway between the restaurant, garden and car park and make room for a large walk-in fridge hidden at the back of the building.

Ryan said: “We’re going to change the entrance and move the car park so that people can enjoy the garden more. The entrance will move up slightly and it will be bordering the property at the back.”

Liam said: “We are keeping the fireplace because we think it’s an important feature of the pub and we also want to reinstate the old one and put sofas in front of it — we want to create a place where we would want to go ourselves.”

The couple plan to put in mature plants to encourage biodiversity in the garden and there will be an electric vehicle charger in the car park.

There won’t be any staff living at the premises so there will be a space upstairs for people to organise get-togethers.

The chefs, who opened Orwells in 2010, said they had no intention of leaving the restaurant and would hire a manager for the pub. They hope to split their time between the sites, which are about half a mile apart.

Liam said: “We love Orwells and what we do there. The smiles we get from customers make it really worth it — we live for that place, it’s our home.”

A public consultation runs until Tuesday and the district council is due to make a decision on the application by January 5.

Last year, Heritage England, a Chinnor developer, made an unsuccessful application to convert the pub into eight homes.

The district council said the pub was “an essential community facility” and should not be lost to the village.

However, attempts by Shiplake Parish Council to have it made an asset of community value were rejected due to a lack of evidence about its use for community events.