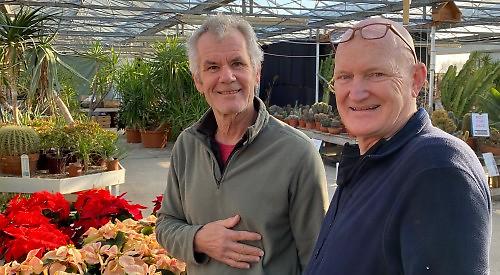 A GARDEN centre near Wargrave could be redeveloped at a cost of £5 million.

Andy Dicks and Rob Scott, who own Hare Hatch Sheeplands, want to demolish more than half of its ageing greenhouses and replace them with allotments, woodland and a recreational field.

The garden centre building would be rebuilt on part of the land where a greenhouse currently stands.

The owners say they would “green” the site by improving biodiversity, capturing carbon dioxide and providing local food production as well as offer opportunities for charities.

The proposal comes more than two years after the nursery ended a seven-year dispute with Wokingham Borough Council, the planning authority, about unlawful development at the site, which is off the A4 near Wargrave.

In a statement, the business says: “Hare Hatch Sheeplands is a long-established and popular plant nursery, farm shop and café.

“We propose to carry out site improvements to enhance and modernise this valued local business.

“Hare Hatch Sheeplands plans to submit a planning application to Wokingham Borough Council in order to allow the business to continue to serve and support the local community.

“The proposals centre on a modern replacement garden centre shop, which together with a redeveloped café and the existing farm shop, will provide the core of the new facilities.

“Removal of the extensive existing glasshouses in a poor state of repair will provide space for new farm-field-to-shop allotments, a children’s play area and a meadow for informal recreation.

“This will provide an enhanced landscape setting, improving the appearance and character of the site as well as supporting sustainability and biodiversity.”

The new-look site would have:

The farm shop and administrative building with customer/staff facilities would remain where they are.

The owners say they want Hare Hatch to be as environmentally friendly as possible and the redevelopment would reduce the building footprint by more than 65 per cent. The centre currently has more than 9,972 sq m of glasshouse floorspace and wants to remove 5,819 sq m. The glasshouses that would be removed date back to the Eighties and would make way for the allotments and recreation field.

Mr Scott said: “If it all runs smoothly and the plans sail through the relevant channels, then we hope to start work as soon as possible.

“Considering most of the work will occur out of season we will have to work in stages.

“The easy part is planting and growing. The building and construction will be more of a challenge. In total, I think it will take around two to three years until everything is complete.”

Hare Hatch has invited feedback on its plans via its website and a “public consultation” at the centre over a weekend.

Mr Scott said the responses had been overwhelmingly positive.

“We had a really great turnout for the consultation,” he said. “So many people turned up, especially on Friday and Sunday. We are currently collating and analysing all the responses.”

He said new jobs would be created at the new-look centre, which would offer horticulture apprenticeships to students at the Berkshire College of Agriculture.

Mr Dicks said he would like to reuse much of the material, including the glass, steel and pipes from the old glasshouses. He added: “Perhaps the most interesting objects we repurpose currently are old commercial refrigerators, which can no longer be used. Rob has several freezers full of compost and plants, such as raspberry canes, which keeps them safe from the elements in the harsh winters.

“Many people pay a lot of money for planters like this in their gardens but we thought these refrigerators would be the perfect solution.”

He said the new woodland would have up to 100 Paulownia trees.

Mr Dicks said: “They are a specific type of hardwood tree, which grow at alarmingly fast rates and can absorb vast amounts of carbon dioxide.

“Once they reach a certain height, we can cut them down to make furniture. This lightweight hardwood makes great furniture that will last for generations.

“We try to reuse all our timber — the doors to most of the buildings have been made with recycled wood and we use old pallets as fencing or partitions.”

Hare Hatch is situated in the green belt, which protects the land from commercial and residential development.

John Halsall, leader of the borough council who represents Wargrave, Remenham and Ruscombe, said: “Hare Hatch Sheeplands is a very valued facility and I look forward to receiving the application. I wish them all the luck.”