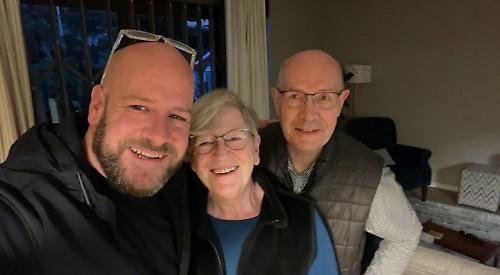 A MAN from Sonning Common is stuck in isolation after being in South Africa when the new coronavirus variant was discovered.

Alex Clarke was visiting his parents in Cape Town when the Omicron variant spread.

South Africa was put on the UK’s red list, meaning you have to isolate in a quarantine hotel for 10 days on your return at a cost of more than £2,000, with less than 24 hours’ notice. Mr Clarke, who lives in Wood Lane Close with his wife Lisa and their sons Ben and Zak, was unable to get a flight back to Heathrow in time to isolate at home so is stuck in a four-star hotel in Hounslow.

He said: “I travelled to South Africa in mid-November when it was on the green list to see my parents whom I hadn’t seen in four years.

“Then the Omicron variant became a great concern and there was a big dash about what to do and the British Government decided to put South Africa on the red list within less than 24 hours’ notice and British Airways cancelled their flights. This was on Thursday, November 25 and I was due to fly back on the Sunday night, arriving on the Monday morning, which was too late to have the option of isolating at home.

“I did all I could do to try to get an earlier flight back so I could isolate at home rather than a quarantine hotel as I hadn’t budgeted for that. BA has cancelled my original flight and I haven’t been offered a refund.

“I managed to get from Cape Town to Johannesburg to fly to Amsterdam and then London. But about 10 minutes before I reached the front of the queue to get on the flight they told me Amsterdam wasn’t allowing transit passengers.

“There were other options but they weren’t realistic and I wouldn’t have known where I might have got stuck so I returned to Cape Town the following day to work out how to get back.

“Eventually, out of the blue, British Airways were taking flight bookings again and I managed to get a flight. I struggled getting a quarantine booking though and sort of had to juggle those to make sure they matched up.”

Mr Clarke, who started his 10 days of isolation on Friday, said he receives three meals a day which are left outside his room door.

He spends his time working and meeting customers via video call and at the weekends tries to get some exercise by walking in the hotel’s car park under the supervision of security guards.

Mr Clarke said: “Airport hotels are not known for having big rooms or views so I can see the car park but fortunately I do have a double room. We can’t move around unattended and are limited as to where we can go. If we want to go outside we let security know and we can walk around the parking lot.”

Mr Clarke said he felt as if he had been “robbed” due to the costs incurred paying for the flights and hotels, which total about £4,000.

He said: “It was the fact it took the Government so little time to have a knee jerk reaction to the variant.

“It was a pleasurable holiday and there were no concerns about flying out to a green list country but British Airways didn’t say, ‘We will get these people back so they can quarantine at home’.

“I now have a £4,000 credit card debt just before Christmas. It’s about £238 per day to be in an airport hotel room with pretty mediocre food and 20 minutes of fresh air outside a day —  it’s daylight robbery.”

Mr Clarke said he was unhappy about being away from his family as his older son, Ben, has Duchenne muscular dystrophy.

“Ben and Zak have been quite upset,” he said. “They’ve been asking if I will be home for Christmas. I was supposed to be away for 10 days and it has been almost a month.”

Mr Clarke is due to return home on Monday after he takes his second PCR test tomorrow (Saturday).