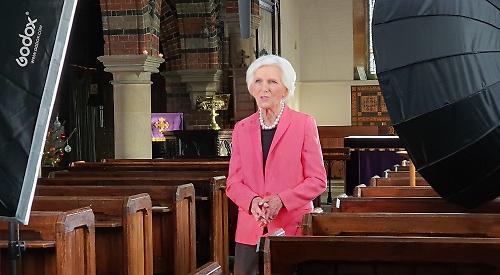 MARY BERRY will be seen on television on Christmas night giving a bible reading at her favourite church.

She was filmed at St James Church in Bix, which she attends regularly with her husband Paul Hunnings.

Dame Mary, who lives in Henley, chose it when the BBC asked her to give the reading as she said she felt comfortable there.

After a recce by director Garry Boon, a camera crew came to film the reading, which will be broadcast on BBC One at midnight on Christmas night (December 25/6).

In the four-minute programme, called On Christmas Night, Dame Mary will read from Luke’s gospel the traditional story of the first Christmas, when angels proclaimed the news of Jesus’s birth to the shepherds. The reading will be followed by a Christmas carol being performed, which was filmed elsewhere.

Churchwarden Kathy Doodson laid out about 50 candles on the windows and around the church for the filming, including an advent ring.

Kevin Duthie, treasurer of the parochial church council, said Dame Mary started to attend the church after moving to Henley in 2018 when her husband met Alfie Hay, who is also a member of the council.

She said she had been looking for a small, quiet church where no fuss would be made of her and the couple began to attend services regularly.

Mr Duthie said: “Mary lives in Henley and comes fairly often. She was looking to do this short Christmas piece and said she’d like to do it at Bix church, which we were thrilled about.

“We checked that we had all the relevant permissions and then were very happy to say ‘yes’.

“They came along at 8 o’clock and set up. They had a call sheet which listed everyone who was there and what was happening and that Mary was going into make-up at 9 at home and coming in at 10.

“It takes them about an hour to make a five-minute film. They did different shots of the church and filmed Mary speaking at the front and at the back.

“She’s a friend of the church and I think she felt she’d be well looked after here. Alfie made her regular cups of coffee. We’re very pleased to see the church used — it was refurbished a few years ago and now we’re building an extension. We’re building so it can be used by the public.”

Mr Hay, who occasionally takes services at the church, said: “Mary loves our church because it’s really quiet. We’re a nice, friendly, quiet congregation and she likes peace. When she first came to live in Henley her husband was walking nearby and we got chatting about the church. He came to some services and then got her coming along.

“Everyone was friendly without being obsequious as she didn’t want people fawning around her.

“But when she got her damehood we did sing Nothing Like a Dame to her, which she liked but was a bit embarrassed.”