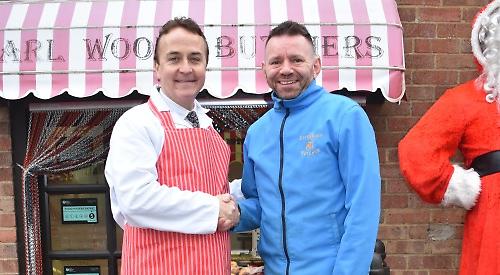 A BUTCHER’S shop in Sonning Common has been sold as the owner is retiring after 31 years.

Carl Wood, who owns the business of the same name in Wood Lane, has sold it to Roland Hazell, who owns Caversham Butchers in Church Street, Caversham. He will retire in the new year.

The name of the shop will change to the Sonning Common Butchers but will continue trading under Mr Wood’s name and all six staff members will remain.

Mr Wood, who founded the business when he was 23, will continue to work at the shop until some time in February.

He said: “I have been doing this for a long time and I thought when I started that if the business went to plan then retiring at 55 was something I wanted to do.

“Roland approached us back in February and after sitting down with him I realised it was a good move for the customers and also all the staff who have been with me for 20-plus years.

“It was a blessing that Roland didn’t want to change too much and he has got a long-term plan to improve the place for the customers.

“The most important thing for me was that the staff were happy and Roland said he wanted to keep them all on. Another really important thing was that the shop stayed open as we had people approach us to sell for real estate. It was lovely to find someone like Roland, being local as well, as lots of people know him anyway.

“He’s just a nice guy and we really hope that customers who have supported us over the years will continue to do so. We want people to know that the shop is in safe hands and it’s not going anywhere.

“I’ll miss all the customers and their friendly faces but ultimately nothing will change for them and if Roland ever needs a hand I’ll come back from time to time.

“There’s nothing for customers to worry about as we couldn’t have a nicer guy taking over and everything is staying the same, it’s only me taking off.”

Mr Hazell, who co-owns the business with Mo Benassar, the catering chef at the Caversham Butchers, said: “I’ve worked in butchers since I was 15 years old and started in Caversham. I went away for a few years and when I came back I started working there again, so I’ve always done it and I enjoy it.

“We bought the Caversham Butchers about two years ago and started just before the covid pandemic hit.  It has been a bit of a challenge getting through the pandemic — there have been a lot of home deliveries.

“Deliveries have taken off a lot and we’re also catering for businesses and hotels.   A lot of businesses have had to change the ways they do things so quickly.”

Mr Hazell said he felt excited to be taking over from Mr Wood and planned to improve the shop.

He said: “We want to do a refurbishment of the shop and put in some new cabinets and display cabinets. We’re going to reinvest. We’ve had a lot of support from Carl. We’ve been so lucky in that aspect because without him it would have been a lot harder.”

For his retirement, Mr Wood plans to buy a motorhome and travel around Europe with his wife, Linda, starting in Scotland.

He said: “I’d like to thank the customers for their support over the last 31 years and reiterate that I want them to keep supporting Roland and the staff like Phil Kent, who has been the manager for 31 years. I’ve had such a good team around me.”

The Caversham Butchers used to be called Jennings Butchers before Mr Hazell took it over.

Mr Hazell, who is married with two children and lives near Reading town centre, first worked at the shop in 1979  and stayed for about 16 years.

He then took over the Jennings family’s other shop at the Milestone Way precinct, off Peppard Road in Emmer Green.

He renamed it Cavendish Meats and ran a community cricket team of the same name until 2003, when he moved to the Hare Hatch Sheeplands plant nursery near Wargrave. He traded there until about 2013 before taking some time off away from work.

He then rejoined the business after being invited by the Jennings family, who wanted to let the shop go and felt he would be a suitable successor.

The Jennings family continued to run their catering butchery in nearby Prospect Street but closed it in October last year due to the impact of the pandemic.