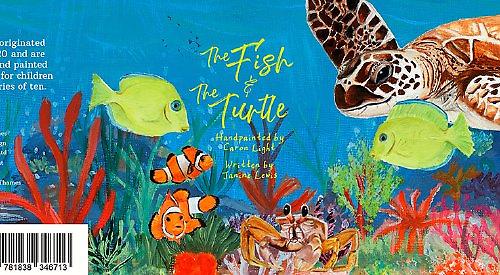 TWO sisters from Henley have released the second in a series of books designed to teach children about wildlife.

Janine Lewis, 54, wrote The Fish & The Turtle and Caron Light provided the illustrations.

The poetry book tells the story of a little yellow fish who goes out to sea further than normal and becomes lost so starts to panic.

She meets a turtle who helps her get home and teaches her to deal with situations without panicking.

Caron, 55, of Hart Street, rediscovered her love for painting during the first coronavirus lockdown last year when her work as a chauffeur dried up.

She then realised her life’s ambition by illustrating The Wasp & The Bee, a children’s book written by Janine, 54, a university lecturer and business owner, who lives in
Norman Avenue.

The women then decided to
produce another nine books, each with a dual message.

Caron said: “We’re also encouraging children to do their own artwork and send it in so we can put it on our website.”

Richard Pinches, of Meadows Farm Studios in Marlow Road, photographed all the artwork and created the layouts.

The book was then printed by Higgs Group, publishers of the Henley Standard.

The next book, The Robin & The Mouse, will be released for Christmas next year but the sisters have used the characters to create Christmas cards this year which they are selling and donating 10 per cent of the profits to the Royal Society for the Protection of Birds.

Caron said: “I posted some pictures for the new book on a UK bird website a few weeks ago and they went down really well, so I thought, ‘Why not do something for charity?’ and we decided to do the cards very quickly.

“Janine photographed the
artwork on her phone but it came out very well.

“We decided it would be nice to do 10 books and do a big gift set but they’re expensive to make so we need to see how well they sell if we’re going to do all 10.

“Things are going well so far and we’re going to start major marketing in January. It’s busy at the moment — we’ve got our website and I’ve been selling commissions and paintings, so it’s building slowly but surely.”

Caron helps out at the Anchor pub in Friday Street, which is showcasing her paintings.

She said: “I’ve been getting commissions from people coming in. The Henley Arts Trail have said the pub and the paintings will be on next year’s trail, so it’s getting better.

“Painting is my passion and I love painting animals. I like to work on a canvas, so oil paint works well. I don’t like watercolour because it makes the paper go all weird and I don’t like acrylics.”

The sisters have dedicated the books to their mother.

“I get my love of art from her,” said Caron. “She’s 78 but she still does lots of art and makes all her Christmas cards.

“She has also painted a
Christmas scene for the next book as we wanted to have her involved.”

The books are available from the Bell Bookshop in Bell Street or from www.beewisepublishing.co.uk

The cards are available online or from the Anchor.