We decorated Christmas tree outside No 10 (again) 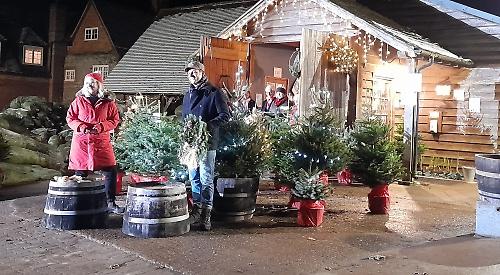 A MOTHER and daughter spent five hours decorating the Christmas tree outside No 10 Downing Street.

It was the fifth year running that Jane Ingram, from the Tree Barn in Christmas Common, had been asked to carry out the task.

She decorated the 20ft Nordmann fir with the help of her daughter Rebecca.

Mrs Ingram, whose husband Andrew grows Christmas trees, said: “It’s a huge privilege and it’s always exciting driving through the gates of No 10.

“It took us about five hours to decorate the tree as it’s a very tall and beautiful tree this year.

“We use the same decorations from one year to the next as they belong to us, No 10 doesn’t buy them.

“The baubles have to be of certain colours but I try to sneak in some different ones, with gnomes and fairies for example, because I think it’s quite fun for the children to have a look at the tree and see what they can spot.

“If we were asked do it again next year we would love to but we never take it for granted.” Meanwhile, the Tree Barn was featured on the BBC’s Countryfile Christmas special on Sunday after filming took place last month.

Presenter Matt Baker was taken on a tour of the snow-covered farm by Mr Ingram, who has been growing Christmas trees for 50 years.

The farm has about 70,000 trees, which sell in their thousands in the run-up to the festive season.

Mrs Ingram, who is responsible for the farm shop, which stocks all kinds of decorations, said: “The crew was very relaxed and it was a very nice experience for us. We were so lucky with the weather as it had snowed and the trees looked just perfect.”

Fellow presenter Charlotte Smith headed to Watlington to meet a butcher, a baker and a candlestick maker and prepare festive treats.

The butcher was Tom Calnan, of Calnan Brothers in High Street, who showed the presenter how to make festive sausages. Ms Smith then walked across the street to the Orange Bakery, where she made buns with baker Kitty Tait, 17, who runs the business with her father Alex.

Kitty said: “It was my first time on TV and it was exciting. Charlotte was very enthusiastic and keen to try lots of the stuff I had baked.

“It was really enjoyable and it was so nice to show off my town.”

The candlestick maker was Sarah Keeley, who runs House of Bluebelle and showed Ms Smith how to make festive candles.