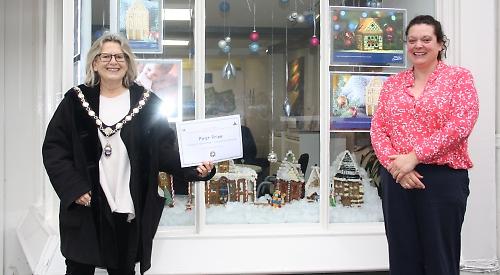 Hamptons in Hart Street won £100 with its street scene made from gingerbread and sweets by residential sales consultant Lupe Sharpe.

Mrs Sharpe, from Wargrave, baked the gingerbread walls at home and then built the display with help from Liz Godbolt, Carina Clark, Victoria Horn and Jo Garbutt over the space of a week.

She said: “I’ve been baking gingerbread houses for years — I make them with my children, even though my eldest is 25.

“I have never made a gingerbread house of this scale before and certainly not an entire street. It was a challenge.

“A Victorian street was perfect for the theme because Hamptons was founded in 1869 and, being an estate agent, we knew it would be a great fit.”

“The windows are made from melted glacier mints, of all different colours, which make a stained glass effect,” she said.

The houses also feature shredded wheat on the rooves dusted with icing sugar, liquorice pieces and chocolate buttons as tiles.

Santa’s legs can be seen poking out of a chimney and there are candy trees lining the street.

Timber Windows, of Hart Street, which won last year’s competition, was runner-up this time with a Henley-themed display of rowing boats, oars, wooden toys and nutcrackers.

Lynette Tweedy, a showroom assistant, said: “We incorporated the boat and the river because we’re located right next to the River Thames. The marketing team designed it and it looks fabulous. They included lots of toys and there is even a little wooden elf door in the centre of the boat.”

She said: “We opened the delicatessen around 14 months ago and it has been such an amazing time since we launched. People have been really supportive and the local twist on the products we sell has been really popular.”

The display featured a sleigh which she bought at the Henley Christmas market, bears in top hats and a Victorian steam train as well as three Christmas spirits, including Henley gins.

Ms Ferreira said: “It took around an afternoon to set everything up. I had a lot of stuff either at home or I bought locally from charity shops and markets. I wrote a poem in the window called A Christmas Carol about Christmas in Henley.”

Retail assistants Lesley Spiers and her daughter Marine designed the chalk board.

Other shops to earn a notable mentions were the Laurence Menswear shop and Lawson’s Goldsmiths, both in Duke Street.

The former has a display of the three Christmas ghosts from A Christmas Carol made by owner Laurence Morris and shop manager Josh Marsh.