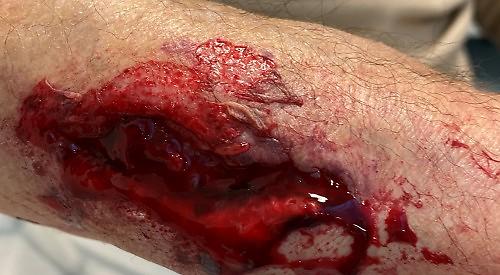 A MAN has told how he was viciously attacked by a dog in his own garden.

John Jackson was with his wife Eunice preparing their lunch at their home in Maidensgrove when they spotted two dogs wandering about outside.

The 85-year-old decided to go out and investigate when one of the animals came at him.

Mr Jackson, a retired company director, said: “As I walked towards the dogs to shoo them away, one lunged at me baring its teeth and sank its jaws into my arm. It was incredibly vicious.

“I ran back inside where Eunice wrapped the wound tightly in a towel. She went out to shoo the dogs away wearing thick gauntlets. They lurched at her and knocked her to the ground before they disappeared off up the road.”

Mrs Jackson recovered and drove her husband to Townlands Memorial Hospital in Henley for treatment.

Mr Jackson said: “The nasty bite I sustained is about four inches long and is significantly deep.

“We rushed to the hospital as by this point my arm had started bleeding quite heavily, I think because I take a blood-thinning medication, so it could have been far worse.

“The nurses at Townlands treated me right away. They cleaned the wound and administered a tetanus shot as well as prescribing antibiotics and painkillers. I couldn’t have stitches because it could put me at risk of developing a nasty infection.

“People at the Bell Surgery and Townlands were exceptional and I cannot praise them enough for their attention.

“This will take a while to heal and I’m going to be left with quite a nasty scar. My family were appalled when I told them.”

Mr Jackson, who has reported the incident to the police, said the dogs were both about 18in tall. The one that bit him was brown and the other was pale.

“I suppose they must have come from the same litter,” he said. “They were both short, squat and had square faces, with no identifications around their necks.

“They were just so vicious and I dread to think what might have happened if our neighbour’s children were playing in their garden at the time.

“Whoever owns these dogs is clearly very irresponsible as the animals are completely out of control. Once a dog has bitten a human I am sure it will attack again.” Mr Jackson, who has lived in the village for 23 years, said nobody in the neighbourhood had recognised the description of the dogs.

“Neighbours saw the dogs but they didn’t encounter them,” he said. “I suspect they may have escaped their owner.

“We live near Russell’s Water, which is a popular destination for dogs being exercised, but we have never experienced anything like this in the time we have lived here.

“I think they had crawled under our gate and that is how they gained access. I will have to put wire on the bottom of the gate.

“I don’t want to be neurotic about the incident. I want us to be able to continue with our lives and enjoy our garden but we just don’t know if it might happen again because the dogs are yet to be caught.

“We are nervous, although we certainly shouldn’t feel that way in our own home.