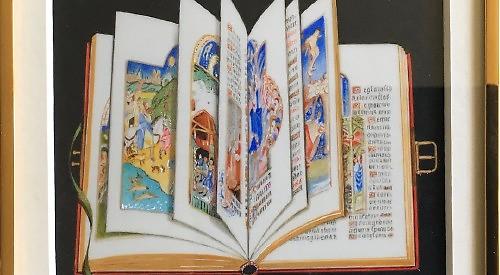 AN artist from Henley has painted matching portraits of a father and son in their royal waterman uniforms.

Bill Mundy, of Wargrave Road, recently completed the oil painting of Jonathan Hobbs about 30 years after doing the same for his father, Tony.

Mr Hobbs Jnr, managing director of boat hire firm Hobbs of Henley, was made a royal waterman to the Queen in 2018.

He is one of just 18 people to hold the position and is the only representative of the Upper Thames.

He was chosen from the ranks of Thames watermen and follows in the footsteps of his father and his colleague Colin Hinton, who are both former royal watermen.

The watermen’s traditional red uniforms are kept in London when not in use so Mr Mundy drew inspiration from an old photograph of Mr Hobbs Snr from 1986.

The 84-year-old artist said: “I saw Johnnie in Henley market place and he said he was meaning to commission a portrait as he remembered the portrait I did of his father.

“When the Queen came to Henley to open the regatta headquarters I managed to photograph them in the boathouse to use for reference when I did Tony’s portrait.

“Luckily, I still had the photograph so I could paint Johnnie’s face from present day and put the two together without him posing in the uniform.”

The artist said the painting took him almost four weeks to complete.

“I enjoyed getting the lovely rich red colour of the costume,” he said. “I painted the face first and then the buttons but once I had the red background it changed the colour of the buttons, making them seem more silver than gold, so I had to go back and add bits of yellow to make them gold.

“My cleaning lady was there at the time and she said she couldn’t believe I had made the buttons gold in a couple of strokes of the brush like magic.

“Johnnie came over to see the painting and he was very, very pleased with it.”

Meanwhile, Mr Mundy has won an award from the Miniature Art Society of Florida for his painting of a manuscript.

The artwork, called The Illuminated Manuscript, won best of show and will be on display during January and February.

Mr Mundy won the same award in 1997 for a miniature portrait of Chief Otunba Runsewe, director general of the National Council of Arts and Culture in Nigeria.

He said: “It’s a really good thing to have won as the exhibition is probably the largest in the world. There are thousands of entries and only 600 are accepted to be exhibited.

“I normally enter portraits and I have won the award for best portrait probably a dozen times but the manuscript won best of show. There’s tremendous publicity in America about the show as it’s so prestigious.”

The artist completed the 4in wide watercolour about three years ago.

He said: “The dawn of miniature portrait painting most likely originates from the art of illumination.

“Illuminations of manuscripts in the 11th and 12th centuries, before the invention of printing, were involved in drawing and painting in the various forms of communication between royal and diplomatic personages.

“To put it all together I got a few huge manuscripts and chose about 10 or 15 different pages and put them together like a book.”

The piece took about 70 to 80 hours to complete and is painted on vellum.

Mr Mundy said: “The lettering was very, very difficult to do as it’s very tiny. I had to use a magnifying glass to paint.

“Luckily, I still have a very steady hand and a very good eye.”