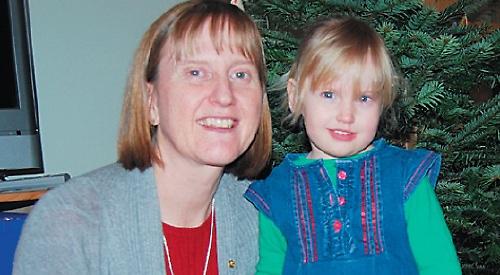 A GIRL who lost a leg due to meningitis when she was a baby now loves playing sport and dancing.

Eleanor Coneybeare, 11, nearly died when she contracted the disease in 2011 when she was just eight months old.

She was taken to hospital where she slowly recovered but doctors had to remove the lower part of her right leg in order to save her life.

Now she uses a prosthetic leg and is doing well after having numerous operations but still lives with the effects of the disease.

Eleanor lives in Caversham with her father Duncan and three siblings, Ben, 19, Nathan, 14. and Genevieve, seven. Her mother Alison died from breast cancer in 2018.

She attends St Joseph’s College in Reading after graduating from the Hill Primary in Emmer Green.

Eleanor said: “I like hockey and I have a spare shin pad if I lose one. Now we’re moving on to football. I’m in the choir and the chamber choir.

“My favourite subjects are drama, music, art and PE. I also love street dance and I’m hoping to enter a competition with my group at Disneyland Paris.”

Mr Coneybeare, 53, said: “It has been a tough 10 years. There have been ups and downs and bumps in the road and Eleanor has had a lot to face and deal with.

“The saddest thing about meningitis is that it’s not something she’s had and recovered from, it’s something we’ve had to deal with ever since.

“She’s had multiple surgeries following recovery, more operations than I can count.

“But she’s a normal, happy young girl. She’s very willing to get stuck in and do stuff. She just gets on with it.

“She’s had a successful transition to secondary school — she has settled in really well and is doing well. She’s trying hockey, which she likes.

“The most annoying things for her about the most recent operation was missing a paintballing trip.”

Eleanor’s last trip to hospital was in November when she went to the John Radcliffe in Oxford for plastic surgery on her left hand as she also had the ends of each finger amputated as a baby.

The operation was designed to give her the maximum grip possible and more dexterity.

She faces more surgery on her leg in order to create the best possible fit for a new prosthetic.

Now she is growing quickly, she needs a new leg every six to nine months.

Mr Coneybeare said: “It can adjust a bit as she grows but she eventually grows out of it.

“Her walking is pretty good and she has good mobility with her leg on. She will always try to participate with games and stuff.

“The mini-blade leg, which became available on the NHS when she was seven or eight, gives her a bit more energy, bounce and reliability. The designs have changed over time.

“She has a wheelchair, which she’s supposed to use if she doesn’t have the leg on. But she doesn’t do that, she prefers to hop.

“You’ll never get a perfect fit for the prosthetic, that’s what all the surgery is trying to achieve, so sometimes it’s quite uncomfortable. It’s heavier than a real leg would be.”

Eleanor, who attends the Oxford Centre for Enablement, will soon be changing to an adult-sized leg but is not altogether happy about this.

“I’m annoyed I have to change to the adult leg because it has boring colours,” she said. “There are fewer colours for the adult ones. I chose my colours — gold, blue and purple and it’s glittery.”

Eleanor was born in August 2010. In April the following year she became ill with a cold, high temperature and vomiting. On a visit to her mother’s parents’ home in Knutsford, Cheshire, she became floppy and her breathing started to change.

A doctor listened to Eleanor’s breathing over the phone and advised her mother to call an ambulance.

She was taken to Macclesfield General Hospital where her parents were told that they might lose her.

She was stabilised and moved to Alder Hey Children’s Hospital in Liverpool, where she was put on a ventilator.

Eleanor became covered in purple-black blotches, which is when doctors knew she had
meningitis.

They told her parents that they were supporting her organs and that if she survived, she was likely to lose all her limbs.

Eleanor spent a week in intensive care and a further six weeks in hospital and in the end only lost one leg and was fitted with her first prosthetic leg when she was one year old.

Mr Coneybeare said: “Eleanor obviously can’t remember any of what happened to her at Alder Hey. We explained it to her gradually and we responded when she asked questions about things.

“We tried to be as honest as we could — it’s not something we shied away from — but we tried to take it at her pace.”

Mrs Coneybeare was diagnosed with breast cancer in late 2014, four years before she died. She had noticed something not quite right with one of her breasts after breastfeeding Genevieve.

Her doctor found a lump and a mammogram revealed cancer. She had a mastectomy but the cancer kept returning.

Mr Coneybeare said: “The prognosis was pretty good to start with but every time it came back. It spread to her hip and she had a hip replacement.

“She was recovering from a surgery and then we found out it had spread to her brain.

“She was very passionate about trying to raise awareness of meningitis and what a life-changing disease it can be, like it has been for Eleanor.

“All the way through Alison’s cancer Eleanor had constant appointments and check-ups as well.

“After my wife died, I thought I just had to carry on without help but my friends said I was mad and one of them set me up with a nanny agent, so for the past three-and-a-half years we’ve had a great nanny from Reading, which really helps.”

Part of the skin on Eleanor’s side is attached to a bone because of an operation she had as a baby and she has also had surgery on this.

Mr Coneybeare said: “It’s difficult having to leave her on her own at the hospital and having to get back to the others but it doesn’t really bother her going into hospital, she’s fine. She takes her cuddly flamingo and she just gets on with it.”

Eleanor said: “I’m not really bothered about going into the hospital. The nurses are very nice. Caroline who helps me with my leg is very nice.”

“We suspect that having meningitis scrambled her immune system, though we’ll never know for sure,” he said.

“She had viral-induced wheeze as she grew and they diagnosed that as asthma. That meant she had to shield during covid, which was challenging for her siblings because they wanted to do things when we were out of lockdown but I had to remind them we had to be careful because of Eleanor.

“Two years ago, she had to have an operation on her teeth which was related to having had meningitis as it had affected the formation of some of her teeth.

“There’s things like that that you never expect that come up years later, just because you had something for a few weeks when you were a few months old.

“Eleanor will continue to need medical care and support, probably for her whole life.”

The family has been supported by the charity Meningitis Now.

Mr Coneybeare said: “In the early stages they gave us a lot of support and information about where to go to get things done, how to find support and what to expect.

“They organised a day trip to Flamingo Land and Eleanor is crazy about flamingos so that went down really well.”

The family was supported by child bereavement charity Daisy’s Dream after Mrs Coneybeare’s death and her husband has been supported by the charity Widowed and Young.

He said: “We’re so grateful for all the support we’ve received and we’ve definitely needed it. We’ve been very lucky.”

Over the years, the family has raised more than £30,000 for Meningitis Now or the hospitals where Eleanor has been treated.

Mr Coneybeare did a triathlon in the Lake District with friends from Reading Rowing Club and an eight peaks walk.

He said his rowing friends had helped him get through the last 10 years.

“There have been a lot of ups and downs but we’re coming out on the right side of things,” he said. “We’re all trying to make Alison proud of us.”