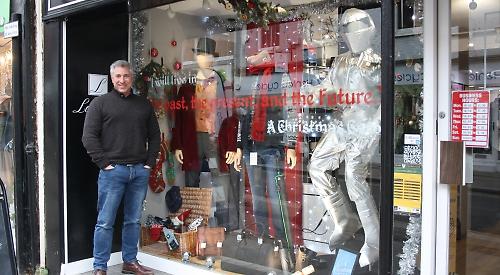 Most traders say they saw an increase in sales compared with last year despite the continuing coronavirus pandemic.

However, some said trade was still not back to normal due to the rising number of cases of the new Omicron variant, which was first reported in the UK in November.

Patrick Brown, who co-owns FourState in Duke Street, said: “We had a great Christmas. It was really nice and busy with lots of lovely customers — people were in the festive mood.

“The shop first opened during the pandemic so we have no data to compare it with but we’re optimistic.

“Knowing some people who have had covid recently, I hope it will just move through and not be as serious as before and we won’t need another lockdown.

Nick Ferguson, manager of Sofas & Stuff in Reading Road, said: “We were far busier than we thought we would be in November and December.

“As we make the sofas to order, we’re traditionally very busy in August and September with orders for Christmas but I think people are investing in their homes a lot more now and people do want to buy local and buy British — that has a lot to with it.”

He said: “We had a very successful month in terms of sales and compared to last year it was a lot better. Everyone hopes to do well in December and we can certainly say that we did so we’ve got nothing to complain about. I don’t think we’ll make any predictions for this year, we’ll just adapt to whatever comes our way.”

“It was busier than last year but it’s different for us as we have lots of people passing by.”

Matt Stone, co-founder of Gorvett & Stone in Duke Street, said: “It was very busy. We weren’t open in November last year and we lost loads of sales that we didn’t get back in December so it was nice to be open for the full Christmas period and even if we discount November this year it was still busy.

“December 23 is traditionally the busiest day for us and that was the same this year. The whole of Henley felt quite busy that day.”

Lorna Dunlop, owner of the Henley Florist, off Hart Street, said: “The Christmas period went well and it was very busy.”

Laurence Morris, owner of Laurence Menswear in Duke Street, said: “Christmas trade was very good, so I’m very pleased. December was a very good month in general and the week leading up to Christmas was busy, which shows people were leaving it until the last minute.

Eva Rickett, who co-owns Henley Scan in Reading Road, said: “We’re obviously not a shop that people come in to buy things but the run-up to Christmas was very good for us.

“November was a record month but considering we only opened in August there’s not a lot to compare it with.

“When the new variant started to spread more in December it went very quiet as I don’t think people wanted to go out, which is understandable, but we had a lot of people that needed stuff picked up for Christmas as presents.

“We did some doorstep deliveries as well. At the end of the day we have to make sure people feel comfortable.”

Michele Langenbrinck,
co-owner of Cecilia Quinn, which recently moved to Bell Street from Hart Street, said: “It’s not like it was before and back to normal but it was fine.

“We had one or two quiet weeks but the following week would be busier so it was a little bit unpredictable. Our new location has helped a lot.

“We’re seeing that people are a lot more relaxed and willing to go out and about after having their vaccines and booster jabs so they feel more confident.

“We feel optimistic for 2022 and hope it’s a better year for everyone.”

Alan Mann, owner of Henley Sports, said the store was busy but sales were down.

He said: “On the whole it was okay but it wasn’t normal Christmas trade. I think that was mostly down to people wanting to distance themselves in the build-up to Christmas so they didn’t catch covid and could spend time with their families.

“I’d like to think that, like when previous lockdowns were lifted, people will want to come and support their local businesses.”