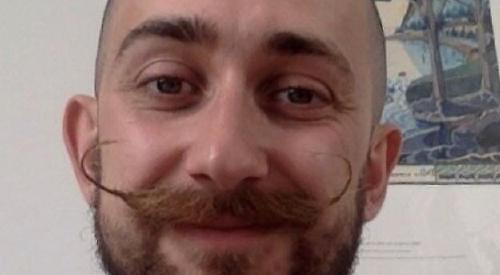 A MATHS and music tutor from Henley has a tattoo dedicated to his job covering the whole of his upper back.

Harley Hulquist, 28, got his tattoo in Brighton more than two years ago because he wanted something to represent the balance between creativity and logic.

The design has a fibonacci spiral going across both shoulder blades. The left side is in black and white with a man flying across the spiral.

The right side has yellow, purple, blue and red splashes of colour with maths equations across the top of the spiral.

Harley, who is also a bartender at Stable 34 in Hart Street, Henley, said the tattoo represented how maths and music were intertwined and showed that “academics can be creative and creativeness can be academic”.

He said: “The left side of the tattoo represents man’s perception of reality, the objective truth. The idea that maths was invented.

“The right side is maths being discovered. It represents how maths in popular selection is
gibberish. You can be expressive and love maths.

“Maths and music are my two fields of expertise. They are intertwined as a form of communication.

“This is teaching people that there is a notional language to music and it was always mathematical and that goes all the way back to Plato.”

The tattoo took about 15 hours in seven sessions to complete and cost him £1,800.

Harley said: “For the first two four-hour sessions I managed to sit the whole time but after that we had to limit them to two-hour sessions because the pain was just too intense. It was awful, the shading and on the colour side especially.”

He was much happier when the tattoo was finished.

He said: “I felt incredible, like I was complete. I felt powerful and proud to be alive. I know that sounds really corny but after going through that, it was all the more glorious.”

Harley has been tutoring for about 10 years after attending The Henley College and then the University of Sussex, where he graduated with a degree in music and a PGCE in maths.

Harley said: “I didn’t think that teaching was happening in our school so I became a substitute teacher and went to schools, academies and private schools and found that it was all the same apart from special educational needs as that does have a strong sense of education.

“Big classes of 30 pupils doesn’t help so it was perfect timing with my increasing frustration at the education system and the pandemic that I went back to tutoring.

“I did everything digitally and subscribed to Zoom and put all my sessions on PDFs and Google Docs and have been on my laptop ever since.

“It helps to talk about real things when teaching kids, things they can’t speak about in big classes as learning by just remembering doesn’t work. We need to be able to understand things
fundamentally.

“My personal experience with education has allowed me to see it from other people’s perspectives.”

Harley, whose business is called the Henley Maths Tutor, has taught students from the age of five to 69.