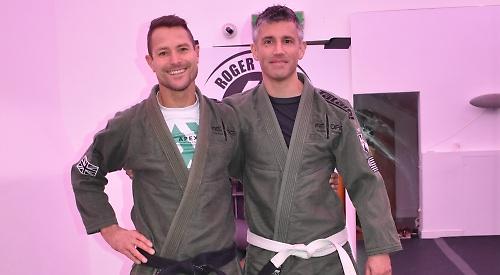 MEMBERS of a jiu-jitsu academy in Henley sparred for 24 hours to raise money for charity.

The Roger Gracie Brazilian Jiu-Jitsu Academy, which is based at the Henley Practice in Greys Road car park, was one of 80 clubs in five countries that took part in the “rollathon”.

This was to raise money for Reorg, a charity which helps serving military personnel and veterans to learn Brazilian Jiu-Jitsu to help with their mental health and physical disabilities.

Members of RGA Henley started at 8am and sparred for four minutes at a time with a minute’s break, rotating between four people per hour.

Academy founder Paxton Gibbons wanted to take part because he lost a friend to suicide and believes jiu-jitsu is “vital” for people to be able to express themselves.

He said: “When my friend took his life it made me think. A lot of men are like, ‘It’s fine, I’m okay,’ but we need to let people know that it’s okay to say, ‘You’re not fine and you need to speak to someone’.

“Hopefully, through jiu jitsu, we can help them. It does help. When you’re sparring you don’t need to think about anything else. It’s quite a relief and takes you away from everyday stresses.

“People come down and say they’ve had a bad day at work and then they start training and forget about it — it’s a nice release. Everyone is equal here and it takes you back to basics.”

The coach earned his jiu-jitsu black belt thanks to the teaching of multiple world champion Roger Gracie.

Now he hopes to leave his full-time job to start his own mental health charity with some friends and travel around the UK teaching jiu-jitsu and giving seminars on the importance of looking after your mental health.

Mr Gibbons said: “It’s such a nice thing to be a part of and I want to do what makes me happy.”

The international rollathon raised more than £582,000. To make a donation, visit justgiving.com/
fundraising/mark-ormrod6