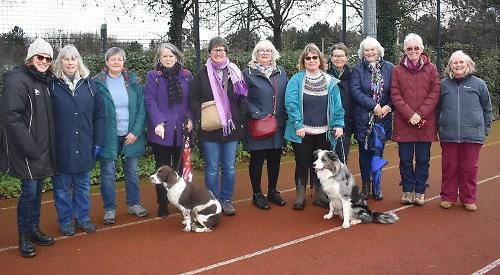 A MEMORIAL match day was held in tribute to a Henley Hockey Club stalwart.

Sue Burrell, who died in April 2020, aged 54, had been a member of the club for more than 25 years, both as a player and committee member.

Current and former players played three 25-minute matches against each other at the Jubilee Park artificial pitches off Reading Road on Saturday.

The teams wore purple and pink shirts, which were made specially as purple was her favourite colour and printed with the words: “Sue Burrell, Memorial Match, January 2022.”

More than 60 players and spectators stood in a semi-circle at the start of the matches and took part in a minute’s applause.

Player and club treasurer Rachel Herbert said: “Thank you so much for coming. It was so amazing when we started seeing the names of people from over the years coming in. Some of you knew her and some of you didn’t but it doesn’t matter as it just goes to show that Sue meant so much and touched the lives of so many people.

“We really want this to be a celebration. It’s a happy occasion to remember all the amazing things she did for this club.

“She was such an amazing character in our club for so many years and it was a shock when we lost her almost two years ago. I can’t believe that time has gone already.

“We felt strongly that we wanted to do something and it’s really important. This is a celebration and we’ll be doing a minute of applause, not a silence, because Sue was never known for being silent.”

The matches were followed by afternoon tea in the clubhouse, which was decorated in purple.

This will be added to the £1,500 raised via online donations when Ms Burrell died.

Ms Burrell had numerous roles at the club. She started as a player and captained the ladies’ third and fourth teams.

She then joined the committee and over the years held positions including club secretary, fixtures secretary and ladies’ club captain.

She also organised numerous dinner dances and social events and was involved in a number of hockey tours. In recognition of her contributions to the club, she was made a vice-president in 2016 and a non-executive director in 2018.

Ms Burrell retired from playing in 2013 but remained on the committee and also took on the role of matchday manager for the ladies’ third team.

At the time of her death, the club said she would be remembered for her wicked sense of humour, her love of purple and her many handbags and shoes.

Since then Ms Burrell’s parents have agreed to sponsor a club “rising star” trophy, which will be awarded to a player at the end ofeacha season.

Ms Green said: “Sue believed strongly in the development of young players so this is a really fitting way to recognise the contribution she made to supporting these players.

“We look forward to announcing the first Sue Burrell Rising Star Award at the end of this season.”